Seeing the current campaign  against the author  JK Rowling, reminded me of a similar campaign by a different group of narrow minded individuals not that long ago in C20.

Quite why  some individuals cannot accept the right of different people to express their feelings and opinions in  spoken words, pictures or books is difficult to fathom. A lack of education in school and/or at home may be part of the answer, though state controls of people's lives is more appalling in some areas of the world than others.

In France only a day or so back, two were seriously injured outside of the former offices of Charlie Hebdo, the satirical magazine whose article in 2015 led to a couple of dozen being killed by some people suggesting that they the killers, were following the Muslim faith..

Two novels come to mind when considering the dreadful behaviour of some people to others and the  huge efforts made even to the extent of killing people, to impose their narrow views upon those with broader  if not holier, lives; the book  covers are depicted below: 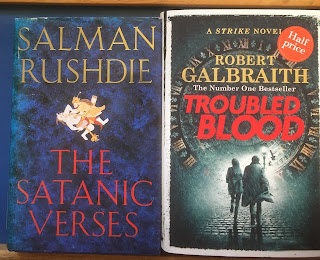 Satanic Verses I read with interest. Salman Rushdie had to go into hiding and be protected by the police for years as a result of his interesting work. What I believe  is called a fatwah was issued against him suggesting as I recall that he could be killed. Of course the Satanic Verses itself does not affect the actual religion but there seemed to me at the time to be a paucity  of those of the Muslim faith speaking out in his favour to decry the fatwah.

Almost as bad are  some expressed  alleged  opinions on Amazon and Waterstones regarding JK Rowling's new book written under her pseudonym Robert Galbraith, supposedly by individuals complaining about Ms Rowling's alleged  attitude towards trans sexuals. Whatever her attitude is she is entitled to hold a view. In any event both sets of narrowminded  people caused me to buy the novels being complained about.

The Catholic Coalition for Marriage which I support, on the other hand published a more positive piece about the right to have such views, saying:

Earlier this year I wrote to you about Harry Coulter. Harry and his Marriage Matters organisation were unceremoniously booted out of a Belfast hotel last October when a member of the public complained about their event. The keynote speaker, C4M’s Director of Supporter Strategy Tony Rucinski, was cut off mid-flow by members of staff. The 55 attendees were sent home. No refund was offered.

I’m pleased to say that the hotel has now apologised unconditionally, refunded Harry's booking fee and paid his legal costs.

Expressing “sincere regret” the hotel admitted that its actions prevented Harry and his guests “from fully expressing [their] beliefs about the law of marriage in Northern Ireland”.

It added: “We recognise that the ability to respectfully debate issues on which we hold strong views is fundamental to freedom of speech for all of us. We also recognise that the particular way in which this was dealt with was embarrassing for you and inconvenient for your guests.”

The hotel committed to “refresh the training of all staff on their responsibilities relating to equality, diversity and human rights”.

I have yet to read "Troubled Blood" but have very much enjoyed watching "The Cormoran Strikes" series on BBC 1 TV. Hopefully that organisation which itself is becoming too woke for my taste, will not decline to broadcast  "Troubled Blood" because of the hate campaign being exercised by some, against JK Rowling alias Robert Galbraith.

Initially during the pandemic when the country was locked down, places of religious worship were closed with the Church of England even prohibiting ministers from entering its churches by themselves. Quite why the CoE took such a line is unclear to me  as using web cams for people to see ministers undertake services does help many. Indeed there are reports that more people are today visiting the websites of places of worship than ever before although this now happily includes the CoE.

The Sacred Heart Catholic church Wimbledon opens its doors daily for private prayer with masses on Sundays and weekdays at various times, subject to a maximum of 72 people attending inside the church at any one time having also had a webcam for its principal services for some while. As there is now no obligation on Catholics to attend mass on Sundays, attending mid-week is more personally convenient. Usually there are over 50 other people present  on say a Wednesday, though I believe, not quite at the 72 person limit - yet.

Walking early this morning through Wimbledon Village I paused to take the free local paper The Wimbledon Times from the usual box outside a small newsagent. There were no local papers inside but there were two copies of the Catholic Herald: 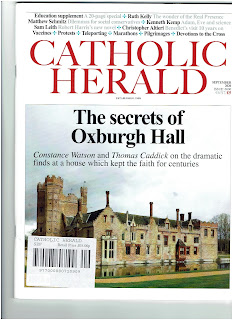 As the monthly edition of The Catholic Herald is usually priced at £5  I entered the shop to ask the proprietor if he was aware of what was in his Wimbledon Times news box this morning. He came out to see what I referred to and said that his wholesaler must have made a mistake and was quite happy for me to take a free copy as pictured above.

My recollection is that The Jewish Chronicle, which is the oldest Jewish newspaper in the world, went into liquidation in April 2020 following the pandemic lockdown. Thankfully it was rescued and continues to publish. However possibly many other religious newspapers and magazines, are in financial trouble.

The Catholic Herald used to be a weekly newspaper although became a monthly magazine some years back but I suspect that many of its sales occur from the back of churches as church goers buy copies while  exiting after holy mass. The same probably applied to other church publications like The Universe and The Tablet. Doubtless sales  of such publications have been affected by the pandemic in much the same way as has the circulation of that secular but free newspaper The Evening Standard which was usually picked up by passengers at railway stations leaving for home after a day in the office. Many more people now working from home presumably makes such free newspaper arrangements more difficult.

Reverting to religion and the pandemic: Perhaps much is changing for religious adherents, for example the paucity of numbers seeking to enter monasteries, convents or religious orders. Indeed I understand that the Benedictine  monks at Downside where they have been for over 200 years;  see an earlier blog post at  Downside Abbey; are to leave the School and Abbey to set up their community elsewhere, presumably because of the paucity of  applicants to consider monastic life these days.

Yet Christian life will continue  but new ways and forms will be different and perhaps more striking, for C21, than those of C20.

The publishers of my book have spontaneously suggested some draft publicity presumably to help sales. Particularly as I had not sought this, I am grateful and not a little impressed. The blurb is below:

‘The Wandering Soul’ takes readers on a gripping journey through the life of Jerry Hawthorne, from his childhood years and RAF service to his successful pilgrimages, volunteerism and career as a solicitor – culminating in Hawthorne serving as the honorary solicitor for the 1982 visit to the UK of His Holiness Pope John Paul II. It’s a life that has been full of challenge and opportunity – environments in which Hawthorne has thrived.

United Kingdom – In today’s world, seventy is considered young. Yet, Jerry Hawthorne has packed so much into seven decades that it could fill a book. Literally, it does!

‘The Wandering Soul’ details the author’s life as a solicitor, pilgrim and unwavering servant to the communities in which he has thrived. It’s a memoir unlike any other on the shelves.

In his book, the author describes his life from age two, after the second world war, to seventy today.

His early life in an RAF nissen hut in Lytham St Annes; hard times at boarding schools; an archaeological dig at Milton Keynes; lengthy train travel to Istanbul; smallpox requiring departure from Turkey to Cyprus military base, thence by ship to Egypt, Port Alexandria and military train to Luxor, in a country eerily awaiting developments after the destruction of three jumbo jets.

He also describes his time in New York, Washington and Philadelphia, meeting his wife while hitch hiking in Ireland; working for two legal firms and for the catholic church, both positive as the latter included the successful visit to the UK by Pope John Paul II, but negative as it involved appalling child protection cases.

The Wandering Soul was completed just before the pandemic caused a national lock down in the UK.

Looking through the book once more there are so many features of travel, office working, being with people and adventure that would be very difficult if not impossible for many people today, whilst Covid-19 remains such a pestilence the world over.

Hopefully all who read this post will keep safe.

Seeing the current campaign  against the author  JK Rowling, reminded me of a similar campaign by a different group of narrow minded indiv...