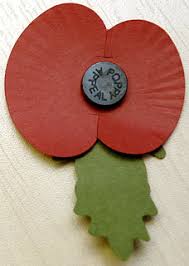 Attending once more at the Beaumont War Memorial for the BU annual
Mass for the old boys who died for their country also reminded me
not only of the speed with which time flies but
also of the large number of events which take place during
its quick passage. Father Kevin Donovan SJ who celebrated
the 2007 Remembrance Sunday Mass and who sadly died between then
and now was remembered along with other deceased members of
the BU and the Beaumont War dead. RIP.

A wreath was laid by a soldier in uniform and the Last Post played
by St John's Beaumont trumpeters before the very well attended Mass.

Father Kevin Fox SJ's sermon was absorbing. He dwelt a little
on a talk apparently given by a Major General in 1921, when the
war memorial was completed. His words on the history
of the poppy emblem for the British Legion's remembrances intrigued.
Father Kevin Fox indicated that the poppy was not likely to have been regarded as an apt
emblem by the Major General in view of its cocaine properties
which when misused are apt to cause the opposite of remembrance.

Another event that has taken place in the intervening 12 months
is the conversion of Beaumont by Hayley Hotels into an hotel.
The old college chapel has been fully restored - the builders only
completed their work at 3am this morning apparently -
and the chaampagne reception for the BU members was the first
time the old chapel had been put to its new use. I had
mixed feelings and opted for coffee rather than bubbly
but the original artwork on the ceiling and the stained
glass behind what was the sanctuary, looked brilliant.

Then onto St Johns for terrific hospitality from
Giles Delaney and his team and much convial conversation.
at November 09, 2008