First (I hope) 4 piccies to give the flavour:
(EDIT - clicking on the photos makes them more dramatic looking) 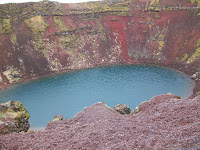 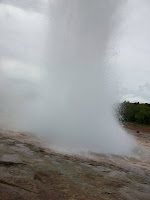 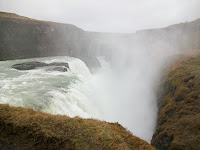 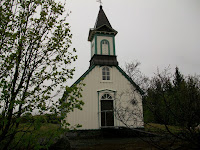 Then 4 more or less random thoughts:

In May, Iceland is bathed in over 22 hours daylight and no real dark night at all, which makes the atmosphere very different from that in temperate London SW20.

The people are very bright and have a great ability to laugh at themselves which is a sign I feel of great maturity. Their cuisine is not that mature though - even the
delicious fish often seems to be over cooked. Bookshops in the Capital at
least, are fantastic and it is not surprising to learn that per capita Icelanders
read more books than any other Europeans

Iceland was in some respects devastated by the banking crisis. In other respects though, signs of rebirth are there following
the peaceful overthrow of the politicians whom Icelanders considered were largely
responsible their financial implosion and the humiliation of subsequent IMF loans.

A trip to Iceland for the tourist is more like an expedition eg with
small whale watching boat heading off into freezing waters where
Artic Tern abound along with the famous puffins. Then down the Rift valley
where hardly extinct, volcanoes and active geysers abound.

The religion was by political decree a few hundred years back switched from
Viking to Christianity. Having later beheaded the last remaining
Catholic bishop Lutherism is I think their main religion today.
at May 25, 2009