The Demolition of Pimlico School 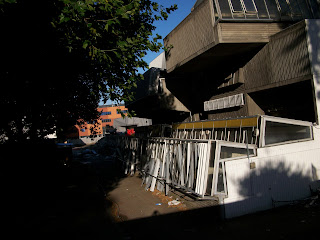 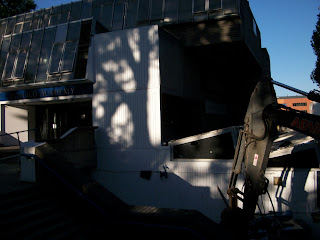 Pimlico Comprehensive School building  has always  been a local landmark near the day job office until now. The school itself  until it closed and reopened as the smart and forward looking Pimlico Academy had a somewhat chequered history. It was as I recall the first school in the country to employ a full time security officer to patrol the school corridors - a sad state of affairs. At one time Jack Straw the Home Secretray under the previous Labour administration was its Chairman of Governors. There were rumours of drugs problems and rivalries with neighbouring establishments. However its demise and renewal phoenix like from the ashes as Pimlico Academy has been a resounding success insofar as the turnout of the students and scholastic reputation  are concerned and long may those continue.

The main disadvantage of all this change so far as I am concerned is the demolition of the old school building.
Hard to describe really but the nearest architectural equivalent building in London both as to style and date of construction is the National Theatre on the South Bank or further afield the great architecturally at least,  underground Basilica in Lourdes France. The grey granite like concrete ages  very attractively in London's weather mix and the different hues of staining colours add to the visual interest. I can see why the students must have held different views about its construction. Large expanses of classroom windows facing out from the granite-like walls took direct hits from  summer sunshine making I would imagine lessons within even more unbearable than school time lessons invariably are. The old comprehensive style governors though in my view patronised the children somewhat by trying to conceal the granite greys  at the school's entrance by affixing a patchwork of red and white glossy tiles. The effect was at best a bit like the primary colours of the then new Victoria Line Tube trains - transport apparently made for  nursery children - or at worst like the entrance to  some public lavatories.

For anyone just strolling through that part of Pimlico the conrtast in the architectural designs and appearance from outside at street level of so many different buildings so close together was really refreshing. St Saviours Church (1864); the nearby Gordon Jeeves FRIBA, designed Dolphin Square and the Regency/Victorian Thomas Cubitt town houses. Now alas the old comprehensive school building looks like: 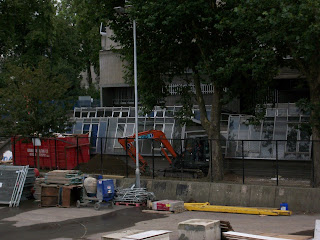 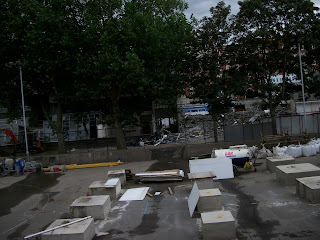 EDIT:
Just to add a final   photograph which, unlike the others above, is not one of mine but is from wikipedia and which I believe was being  taken as I passed by  the site on a lunchtime walk last Thursday: