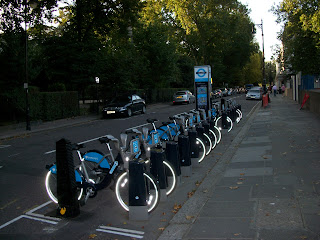 Given that Barclay's Bank paid some £25m to  sponsor London's new tfl bicycle  hire scheme,  the title to this blog post should perhaps be "Barclay's Bikes" or even "Kens' Bikes", as  the scheme was an idea of the previous London Mayor. However  tfl bike hire actually became reality on the current mayor's watch and  the Boris Bike alliteration is attractive.

Applying  for membership online was straightforward enough and Barclays/tfl efficiently sent out  the key required to  unlock the bikes and ride away into the sunset. The key contains a barcode which upon being swiftly read or scanned releases a bike  for use. This week's weather was ideal for bike rides during dayjob  lunch times. Fortunately the dayjob office is in a   mainly residential area of London  which is quite traffic free, making  a bike ride an enjoyable way of travelling short distances but currently care is required to map out side roads and car free routes because London is still enthralled to the motor car.  Congestion Charging has improved things a little in recent years - despite the protestations of the US Ambassors.

My first Boris Bike trip was to Sloane Square by the back doubles thence to Belgravia,  Victoria and return all in 28 minutes (the first 30 minutes are free of charge). The second trip was a slightly more adventurous  journey onto part of the very bicycle unfriendly Grosvenor Road although there is a bikeway section approaching Chelsea Bridge; thence to the Albert Bridge, thankfully closed to motor traffic, crossing the bridge southwards over to bicycle friendly and relatively tranquil Battersea park; through the car free  park roads near the Thames then onto the bus/bike lane north over Chelsea Bridge and onto the east bound  section of Grosvenor Road where thankfully a longer bikeway has been created then the final stretch through Lupus Street and return in 29minutes - phew!

London does need to become more attractive for cycling.  The cycle paths are a start but they do need to be thought through. Simply tailing off cycle paths  at  difficult junctions and giving priority to motor traffic leaving  cyclists and pedestrians to  fend for themselves,  is too primitive and dangerous. When travelling in a modern car with windows closed most people probably fail to appreciate how noisy their vehicle is to anyone  not also cocooned in  cars and how dangerous they are even at speeds of only 30 mph.

Boris Bikes are robust but on the heavy side so not ideal for longer journeys but great for short rides especially if/when the London Underground is hit by one of its  strikes. The exercise is good too but one of the many attractive features is the ability the scheme provides for a change in routine  of dayjob life.

My nearest Boris Bike  park is adjacent to the old Pimlico School building about  which I commented a few days  back, so I took the opportunity of taking the up dated photo below, which shows that all of the original  school building is now down and out: 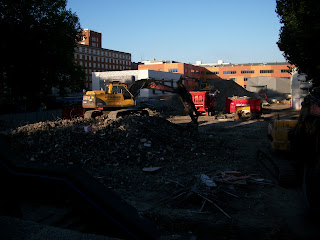