More on the Papal Visit

Wimbledon Common opposite the Papal Nunciature's residence was even more crowded this morning than yesterday with well wishers hoping to catch sight of His Holiness Pope Benedict XVI.  Again there were many young people though more of my own grey haired generation were  evident this time. No folk songs unlike yesterday but today's far larger crowd was as high spirited as before. Cardinal Vincent Nicolls of Westminster was cheered and he reciprocated by handing out some postcards signed by His Holiness.

The Pope left the Papal Nuncio's residence walking towards us at first and began to cross over Parkside apparently to greet the teenagers who had been singing "Pope Benedict we love you..." all to much clapping and cheering but then his limo/security advisers met him half way across the road to drive him off to Wimbledon Park. 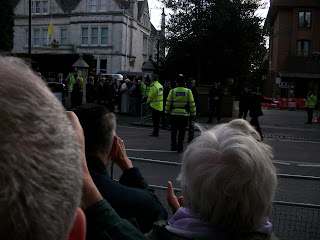 The thousands who turned out yesterday in Hyde Park and today in Birmingham follow the pattern set by the Faithfull in Scotland who turned out en masse on day 1 of what has proved to be a very successful 4 day state visit.

One of the remarkable and hopefully lasting features of this Papal Visit, is that it is causing many of the British people, media and establishment  to be more reflective about the meaning of life and rather  less superficial and parochial  sounding  than often has been the case so far   at this end of C21

In the end  the  protesters and sceptics did not  make the slightest difference to the  provoking  of deeper thought and discussion following in the wake of His Holiness during his 4 days here. Well done.
at September 19, 2010