Being an awkward gauche person with few artistic abilities, artists and their work are great sources of interest and fascination. I recall years ago when a student at what was then known as Holborn College of Law Languages and Commerce, looking at the art students spilling out of the Central School of Art or was  it Drama or Speech or maybe all three and guessing that their art courses were far more interesting than the very dry law degree that we were all cooped up studying for at the time. We law students  all even looked a little dry and dull whereas of course they looked - well arty. However the law may be a dry subject but  in the main my attempts at its practise have not been too bad whereas had I  put my hand to art and artistry probably neither  the world nor myself would have been any the richer.

I recall attending an exhibition of Lucian Freud's paintings in April 1988 at the Hayward Gallery on London's South Bank. His depiction of the human body in particular was and I think still is, most unusual. The warts and aspects of the human condition that many in public life then and  these days prefer to airbrush out of their publicity photographs or portraits Lucian Freud chose to highlight. His contrarian  approaches to depicting  the human condition starkly and almost exaggerating what others in the world may regard as blemishes, have the effects of making the  human subject more human and perhaps more  lovable. The  airbrushed approach renders humanity a little chocolate boxy and less likable  in my view anyway. 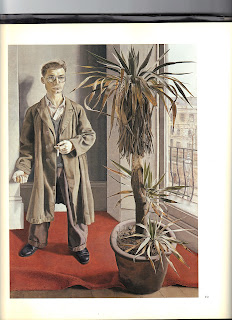 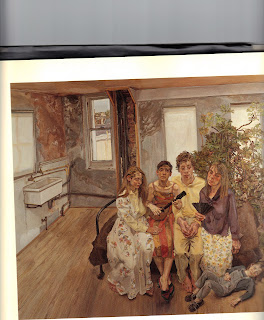 The above two pictures are scanned in from the slightly pricey catalogue  purchased in 1988, to illustrate these points. I do not quite have the courage to post his paintings of naked humanity where the warts and all characteristics of his work are clearest but   if any copyright or other authentic  sensibilities are still offended, I will of course take the above two copies down.

Two of the best anecdotes about Lucian Freud that appear in today's newspapers are firstly, he apparently once  caught a burglar red handed on the job in his London Studio and instead of handing him over to the police did a trade under which the  burglar agreed to sit for free as the artist's model. The second concerns a reporter from the Guardian who after months of trying unsuccessfully to secure an interview with Lucian Freud eventually managed to have a lunch with him. Subsequently so the reporter's story goes, she was asked to look at some of his work at the studio. After waiting a while for him to set up the paintings for her she was invited up. He was on his back on a bed and suggested that the paintings looked better from that position...
An invitation she declined.

I doubt that a lawyer would  get away with the same approach.