Holidaying in Rampisham darkest Dorset an array of mysterious looking  radio beacons featured large in the landscape as may be seen (I think)  from the photo below: 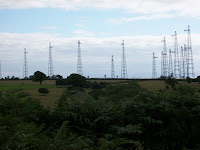 Locals suggested that they are part of the BBC. However the BBC being a media organisation is not usually backward about broadcasting its name yet there was no obvious BBC insignia on the site entrance. Another possibility is that of mobile phone operators using the masts to relay phone calls but as our nearby cottage had no mobile phone reception at all that too seems unlikely.

No; my guess is that the masts are linked in some way to the government's GCHQ spooks operations at Cheltenham. Spies unlike the BBC are rarely keen to proclaim their existence and the whole array area has an aura of secretiveness.

Dark secrets apart, Dorset is very pretty and ideal for a quiet break from the hustle and bustle of the Big Smoke. The pubs are cosy and cheerful as pubs should be and pub lunches are especially good; the nearby Chesil beach and Jurassic Coast make for some bracing walks; indeed the Jurassic coast is the only natural (not man made) World Heritage site in England.

However residing permanently in the inland area of Dorset does not appeal (to me). Nowhere worthwhile within easy walking or cycling distance and public transport being very limited, traveling everywhere by car even to buy bread or newspapers seems essential. Apart from the cost of being so dependent on motor cars the lack of physical exercise for those who do not actually work on the land or otherwise undertake physical labour could be detrimental for many. In the nearest village general stores, itself a longish hilly bike ride away, my purchase of the Independent newspaper met with the response from the young lady at the counter that "we don't sell many of those here". Upon enquiring further, she said that everyone local bought the "Telegraph". She may have been exaggerating slightly as they had for sale at that time 09:15, two copies of the Guardian as well as the single Independent newspaper but I interpreted her comments as signifying that the cultural, political and ethnic mix that applies in the great metropolis does not extend to that part of the South West. I can see the attractions especially for farmers (for whom of course it is essential) of rural life but conclude that permanent living in the cosy English country side or in  a village would not be for me.

Upon returning from a few days away from London,   how much of the atmosphere and way of life in this great city are taken for granted, become very apparent.
at September 01, 2011