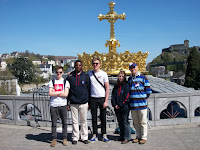 For this trial run we restricted group numbers to seven comprising Father Francis, the group chaplain, Leo and George two former Donhead boys (now Wimbledon College students) Bernadette, formerly from Baghdad whose nephew and nieces   travelled with Group 35 in the 1980s,  during the first Iraq War, Rachel and Paul Ives who are very experienced helpers and yours truly as Group Leader. 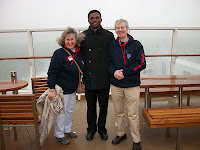 Father Francis age 29   from Nigeria has never been on a ferry or cross channel ferry before and his excitement at the experience on the travel out was plain. This continued with his first trip to a chip shop at Calais, first party on a chartered pilgrimage   overnight train, first  sight of Lourdes and first picnic at the foot hills of the snow covered mountains of Gavarnie.

Doubts about whether Team Donhead would be of real assistance to HCPT family groups or whether we would have a fulfilling pilgrimage, were soon dispelled as  upon arriving at the Hotel Alba after the overnight train down to Lourdes, while we were having breakfast, the Deputy Group Leader of a family group told me that her Group Leader and one or two other of her helpers had been unable to travel and that  her group urgently needed night watchman  assistance with sitting in the corridor outside their children’s rooms between 12 midnight and 6:00 am.  On the first night,   two of the older   Group 729 helpers took to this night duty with enthusiasm. Staying awake for the whole night following the limited sleep afforded by the Couchette train travel the night before, proved quite challenging. For the second night the two old Donhead boys took up the baton and during those small hours were even able to revise for their forthcoming ‘A’ Level Exams. The next morning  the two boys  crashed out  to sleep;  the Deputy Leader sang out their praises and gratitude for  their help with that overnight duty – a quasi all night vigil - and we all prayed for  success with their A levels.

Father Francis was a source of inspiration to everyone and his presence enabled us to invite others to share Mass with HCPT Group 729 including a mass of thanksgiving and farewell at Donhead, attended by pilgrims from both HCPT Groups 35 and 729 together with parents and siblings who had come to meet child pilgrims, at the end of the long  journey back to Wimbledon from Lourdes. 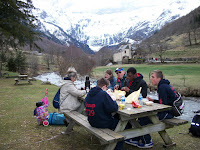 George and Leo were appointed as umpires during the London Beaumont Regional Sports Day which because of heavy rain, took place in the conference hall at the Hotel Alba.  More mundane but still important work, included loading and unloading luggage onto the chartered train, fetching and carrying and being available generally to support and assist.

Seven people conveniently fit around one dining table, can attend mass around a small altar,  as well as travel together in one train compartment  (though a second was taken over for spare couchettes at night) and generally converse,  argue laugh pray, sing have fun and guide each other as one small undivided group.  The experiences reported by the youngest in the group (age 16) through to the oldest (age 66) were predominantly those of wonder and awe.

The pilgrimage was uniquely wonderful so HCPT Group 729 is likely to see its second year which I ill be as good as the first. 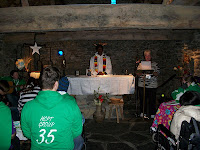