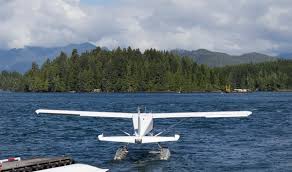 Having lost my own photos it was good to find a photo on the internet  (above) of the  seaplane that  I traveled in last week from Vancouver to Vancouver Island and further photos below.

Some further reflections on what turned out to be quite a journey for both business and pleasure last week and the week before are as follows:

But for the business needs I don't suppose I would ever have visited the New World. The cost of traveling there from the UK is expensive and I should have thought prohibitively so for most people. However the cost of travel on public transport whilst there seems very cheap when compared with  UK. For example the 40 minute light rail journey from Seattle to the  Sea-Tac airport cost about $2.50  whereas  15 minute  Heathrow express costs £19. However I surmise that  public transport in America is heavily subsidised  compared with the UK as everyone in the USA seems to be even more heavily dependent on cars than people over here.

People in Vancouver seem predominately younger than is apparent in European cities although local Canadians sounded surprised when I mentioned this.  Vancouver is a city which is invigorating to explore and seems very proud of its British heritage as is apparent for example by the affection for the local steam clock which looks a little like a miniature Big Ben  plus steam: 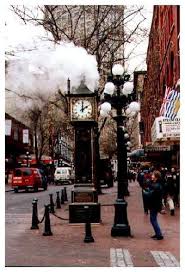 Taking the early  Amtrak train  from Vancouver to Seattle  was fun and as I had  not yet passed through USA  security as the flight had arrived in Canada there was a need to go through USA immigration at Vancouver before boarding the train. Only 3 of us needed to be checked however so this was a speedy and I surmise far more gentle process than would have applied to immigration procedures upon arriving direct in the USA by plane.

A  feature that struck me as regards  both Vancouver and Seattle was the number of beggars, both men and women young and old of many races. London's efforts to provide beds for all those who might otherwise be on the streets seems to be working well by comparison.

As  visitor  to the American cities however this was  really offset by the warmth and friendliness that  was encountered everywhere - in the street, shops public transport church cafes etc.

A surprising feature of Seattle was how its deep water harbours were difficult to enjoy close at hand owing to the presence of the two storey freeway for much of the shoreline in town. On the other hand taking a block inland from the sea gave an exhilarating walk and   its sea markets were really bustling and atmospheric perhaps more so than I have ever experienced elsewhere
: 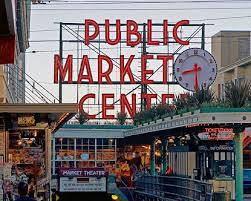 Overall it is apparent that Canada and the USA are fantastic places to visit and their welcomes to people from the UK are second to none. The costs of travel there and the 9 hour time difference though are obviously sizable deterrents
at October 29, 2012