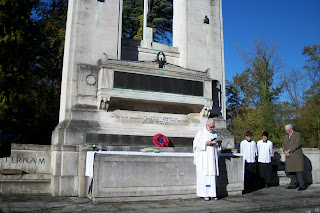 Visiting Beaumont once more for the  2012 Remembrance Sunday Mass  was a very sad and happy occasion. (My previous blog entry about Beaumont friends and BU comments may be found at:

Sad because remembering the dead and the wars they had fought in  is always  sad and sobering. One or two more BU members were mentioned as having died recently and it was only a few months ago that a commemorative Mass was celebrated at Farm Street Jesuit church for the late Father Dooley SJ who himself not so long ago had celebrated this Remembrance Sunday Mass at Beaumont.

On the other hand this was a very happy occasion also. Seeing old friends, walking through the grounds and buildings of the old school, enjoying a really good lunch afterwards at St Johns  Beaumont (courtesy of Giles Delaney headmaster) and the best sunny weather that I can remember for this occasion.

Seeing John Lipscomb again (he  taught me maths at Beaumont) was a real treat: 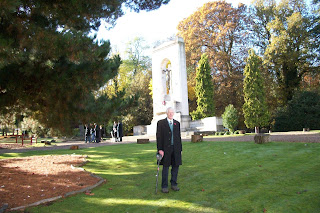 Although the hotel that is now Beaumont is extremely welcoming to OBs and guests and gave us freedom to roam at will it was still somewhat sobering to see some of the old school places adapted and changed for hotel use: 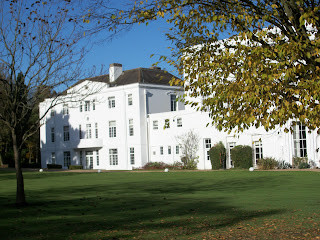 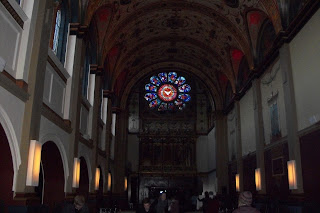 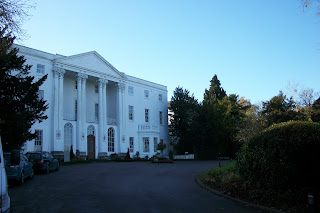 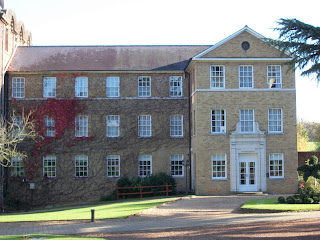 The lunch at St Johns afterwards was a real treat and though I think I was the only one from the final Beaumont year who attended (others attended the recent BU dinner which I was unable to attend) there were many from HCPT who I knew.  Mrs maytrees and I sat with some.

Fond memories of Brian Burgess (RIP) were discussed with two of his sisters.

Giles Delaney the St Johns head is so he mentioned to me, proposing to adopt the Carmen (sung at the end of Mass) for St Johns. He wore a BU tie and I think hopes to adopt that too.

Sadly a couple of days later after a very friendly governors' meeting at Donhead, Father Keith the parish priest told us that the Jesuits though staying in Wimbledon, were to cease manning the parish church in October 2013. This to me will be sobering change well initially anyway. The Society has I think manned the church in Wimbledon  from about 1887. Still there was much discussion and not a little wine drinking over supper afterwards so a little like Remembrance Sunday at Beaumont and St Johns, the sadness was tinged with much friendship. Given the paucity of vocations in Western Europe changes of this kind occur. A large continuing SJ presence in the three or is it four houses near the church  in Edge Hill will hopefully continue.
at November 17, 2012