The daily commute by public transport as distinct from private motor car, affects many if not most  working adults in England certainly at least in London.

Traveling to and from work by bus tram train or tube (in Wimbledon confusingly there is no (underground 'Tube' line but  two  overground TfL Underground lines plus a couple of overhead railways one of which is run by SWTrains)  is part of ordinary life for  many people including yours truly  so  generally,  anything   seems rather more worth a blog post than the almost routine commute. Nonetheless the commute for an huge number of people, takes up a significant proportion of time each day so  on occasion is in my view at least, worth a blog-post.

Those age 60+ living in London currently have free 24 hour  travel  on TfL and free travel on  SWTrains but only  from 09:30am. As the cost saving is significant, the switch from commuting SWTrains   Wimbledon to London Vauxhall return,   to  traveling  outward by Underground train from Wimbledon to London Victoria but return by SWTrains from Vauxhall to Wimbledon, made sense  given that Victoria and Vauxhall are more or less equidistant from the  day job office.

Interestingly since British Railways were de-nationalised  in the 1980s the train companies  have invested £millons in  introducing new and  more comfortable trains. Whether this would have happened anyway had there been no de-nationalisation is a moot point. Experiences on London Underground  however suggest that a substantial change  was required to encourage the same kind of development. Since the creation of the office of Mayor for London, the Tube/Underground and other transport systems  overseen by London's Mayor(s) have substantially improved. Ken Livingston (politically left) followed by Boris Johnston (politically right) have been  in charge and coincidentally or not, during that time Transport for London has been improving  the Tube/Underground in leaps and bounds.

The lesson I draw from those experiences so far at least, is that services run by regional companies including semi nationalised ones,  are far better than those run by the  State for the whole country.

However the Wimbledon-Edgware  Road Underground Line seemed to have escaped the modernisation affecting the rest of the system - until this week when  the existing ancient underground trains looking like this: 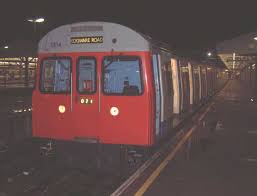 began to be usurped by rather more modern looking underground trains, looking like this: 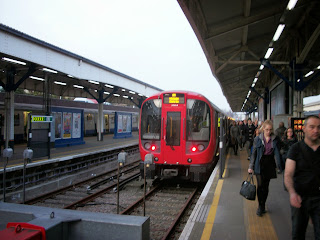 Not world shattering news yet for many people making their daily daily commute, quite a change.

Another benefit of the longer daily commute - c. 30 minutes by Underground compared with c.12 minutes by SWTrains, is that of reading. 12 minutes is too short a traveling time to read a book but for reading a chapter or two each day, 30 minutes is ideal.   Alas the Amazon Kindle rather than old fashioned books, is currently best for Underground reading as not only is the Kindle very portable but also has inbuilt lighting. Such in built lighting is at present essential for the Wimbledon section of the District Line, where old trains' lights go out frequently, perhaps because of running over points etc.

Presumably the experience on the new Underground trains will be rather different. If so I may switch from Amazon reading back to old fashioned books.
at March 15, 2014