The 2015 Christmas season began on the right note (pun not intended!) this year with the Donhead School carol service in the Sacred Heart church. The church was packed to overflowing, which perhaps illustrates how full all  good schools are in London at present - both state and private.

Donhead is an unusual school in many ways, not least because a great proportion of the boys there leave at age 11 for the neighbouring Jesuit comprehensive school across the road.

The Donhead  carols this year were a wonderful mix of the traditional carols sung by the whole congregation of boys, staff, parents and friends and new and unusual carols, sung by the boys' choir and in one or two cases, solo or in duets, by very talented young choirists.

A trumpet brilliantly played by a professional musician who himself was an old Donhead boy added to the resounding success of the singing.  Reflective biblical readings interspersed the carols and  the event concluded with a blessing from the parish priest followed by mince pies in the neighbouring hall..

Held the following evening was the office party for the 22 or so members of the firm's employment and schools team.  Still being a relatively new member of the team, I was slightly unsure of what to expect not least because the venue was not in a restaurant but at the "Peacock Room" in the oldest part of the firm's London offices.

A karaoke  system had just been acquired and after the meal it turned out that everyone present had to take turns at singing a chosen song at the karaoke  with the rest of the team joining in with much laughter and frolics. The idea terrified me as unlike most people in C21 certainly the younger generation, I had  never previously sung at a karaoke nor enjoyed the fun that such singing engenders. The saving grace was  that one could select both the song to be sung and  colleagues to make up a duet or larger group.

In the event  Simon and Garfunkel's "Cecilia" proved to be ideal as this had been part of the "Bridge over Troubled Water" LP of my youth and was also fortunately well known by the  rather younger lady solicitor who had the misfortune to be asked to sing the duet with me. 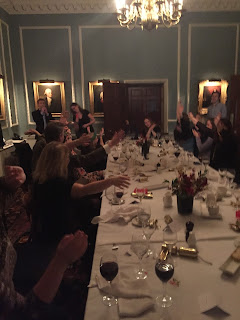 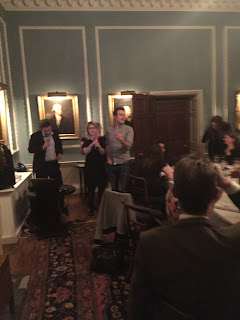 Walking back from the party towards Waterloo Station late at night, it was good to see that many others at offices and students at the LSE were enjoying the Christmas season. Also Westminster City Council has put on some  hugely attractive Christmas  lights over the Strand.

On a sadder note though the number of people sleeping rough seemed to me to be larger than ever especially near the Waterloo pedestrian underpass.

Those of us with homes and employment  need to work to ensure that the rough sleepers too enjoy Christmas in 2015.
at December 12, 2015