The annual post London Olympics cycle races almost coincided with the opening of the Rio 2016 Olympics yesterday which hopefully will be a great success, particularly for Brazil and South America despite the controversies in Rio about the costs.

There was some controversy locally about much of Wimbledon being closed for the day last Sunday for the post 2012  Olympics commemorative cycle races, as the bikes raced through Worple Road, up to Wimbledon Village,  through to  Putney and enroute back to the former London Olympic Park at Stratford.

The controversy was probably generated by those who prefer to use their cars on Sundays rather than walk, cycle or even take public transport. Wimbledon is particularly well served by the latter with  two rail links, London's one tram way and two Underground lines, all of which remained fully open.

In any event shutting the roads for one day a year hardly seems unreasonable.

As for the cyclist themselves the following probably speak for themselves: 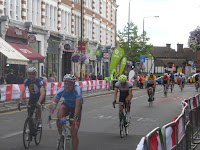 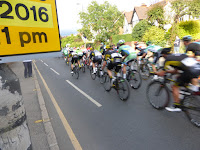 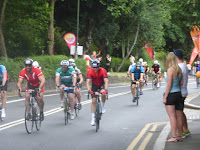 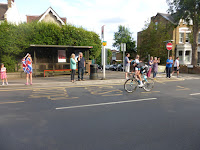 Thankfully ordinary life goes on despite some  men's  inhumanity to man affecting so many parts of the world.

Having been persuaded to cycle  the 70 miles to Shoreham-by.Sea when I happened to meet an old friend while watching the cyclists stream through Wimbledon Village three years ago Cycling to Shoreham  sadly I doubt that I could complete the 100 mile route at this time at least on my  40 year old bike.