Maytrees min having suggested an outing to the local HMV Curzon cinema last week we selected the film "A United Kingdom" which was based on a true story.

The film commenced with family scenes in London at about the time of the start of WWII.

The opening scenes comprised what was presumably a normal enough mother father and two working young adult sisters. One evening the slightly more extravert sister persuaded her quieter sibling  Ruth  to accompany her to a local dance which they then attended again by which time a shy African man  Seretse (David Oyelowo) had become attracted to Ruth (Rosamund Pike). 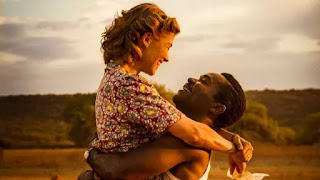 Ruth's father whose racial suspicions and  intolerance were  then typical. was unlikely to have welcomed his daughter's new boyfriend into the home so initially the couple bade farewell a few streets away from Ruth's family house.

Later when Seretse was called to return home following the death of the King of Bechuanaland his royal background became apparent to Ruth. The couple married in difficult circumstances given the  racial prejudices in England at the time and flew to South Africa thence to Bechuanaland.

In many ways the initial discrimination of Ruth by many in Southern Africa  mirrored that of Ruth's father in England although what used to be called the "upper class"  British out there were very poorly portrayed in that regard also.

Despite trials and tribulations Ruth made home in the kingdom much against the will of the arrogant British rulers who essentially persuaded Seretse to travel to London and signified that he would be sent to the Carribean  when Ruth too left  Bechuanaland. The discovery of diamond wealth and some amazing scenes by women of the protectorate made for a riveting ending.

Overall  A Unted Kingdom ranks  among one of the most memorable films I have seen.