An early arrival  in mid-May  at London Paddington Station  for the train to Bath Spa,  meant that walking to nearby Kensington Palace Gardens  for a spring day was  apt.

Londoners are most fortunate to have a legacy  of large parks in and around the city and Kensington Palace Gardens is no exception. Presumably such an attractive  legacy of grand open spaces in the centre of Town as well as further out, in places like Richmond Park and Hampton Court, arises  from the days of monarchs of old about some of whom arguably, the less said the better.

An unusual display by the lake in front of the palace itself was quite  eye catching although taking a close up photo would have risked disturbing the swans if not their human counterpart: 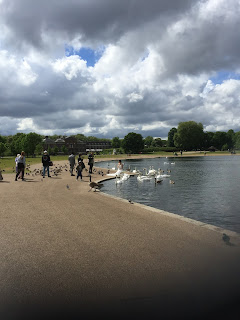 Quite why the lady is dressed as white as a swan  was unclear to me but  she did catch a good deal of interest especially from the swans.

White was a springtime colour that also caught the eye early in the morning at Stratton-on-the-Fosse.: 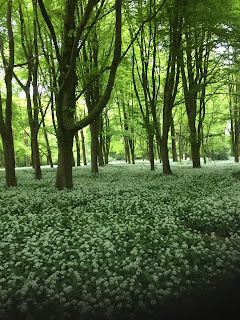 Additionally    the astonishing  variety of   spring time scents in the atmosphere,   is   a real contrast to the diesel and car engine filled air that often pervades city-life though of course cities  often  have their own different fascinating areas to enjoy not so available in the countryside.

Concluding with a photo or two of the School entrance seems  apt. 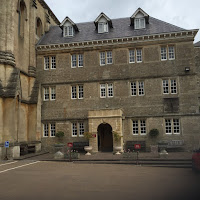 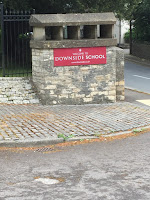