As Mrs Maytrees  with the car was elsewhere on bank holiday a trip to Kew Gardens seemed a pleasant way to spend a sunny  Monday at the end of August.

Traveling by Underground from Wimbledon with a view to changing trains at Earls Court for Kew I assumed that the District Line train was unusually crowded because of the huge engineering works being effected  at Waterloo, affecting SW Trains during August. However when the crowds exited at Fulham Broadway Station, it became apparent that Chelsea FC were playing at home that day.

Going to Kew Gardens as a boy I recall the admission fee going up from 1d to 2p upon decimalisation of the £. However as others in the family were not so sure I checked with Hansard (Parliamentary records).

Obviously MPs were  more familiar with Dickens in the 1920s, than perhaps many are today, as Hansard records:

asked the Minister of Agriculture if he will consider the advisability of reimposing, for Revenue purposes, the admission fee of one penny to Kew Gardens which was abolished in August, 1929?

I have had this question under consideration, and I have decided to reimpose as from Monday morning next this admission fee of a penny, except on students' days (Tuesday and Friday) when the admission fee will525 continue to be sixpence, and on the four Bank Holidays (Easter Monday, Whit-Monday, August Bank Holiday and Boxing Day), when admission will be free.

How much do the Government expect to get from this change?

Will that fee of one penny be charged when classes from elementary schools are taken to Kew?

It will be charged, on the days when it is on, to everybody.

Will Scrooge be the caretaker?

Will it be another penny to walk on the grass?

The cost of admission in C21 even to old age pensioners such as yours truly was only a few pence shy of £16. Nonetheless  despite the  cost there were a large number of people in the queue for admissions.

The visit was well worthwhile though. I had not appreciated how huge Kew Gardens is and I must have walked miles. The centre piece for me was an architect designed giant beehive which visitors were encourage to walk round through on and over. Photos as depicted below  do not do the bee hive justice: 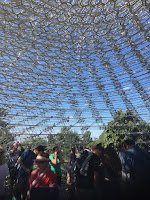 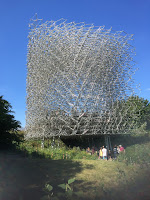 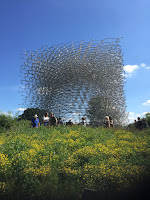 The glorious weather-unusual for a British late August bank holiday gave Kew Gardens a wonderful sheen and seemed to put other visitors in good form.

Kew Palace the family retreat of King George III, I had not seen before hence photographed below: 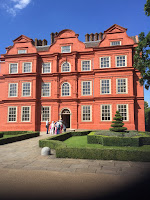 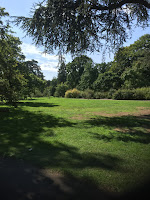 The distances between the gates into the Gardens was rather longer than I had anticipated with it taking perhaps and hour to saunter between Victoria Gate the Kew Gardens underground station  access point, and Lion Gate which is a mile and a half from Richmond Station. However  roaming around the gardens  conservatories  and tea shop covered many more fascinating miles. Exiting at Lion Gate for Richmond the issue then arose of the huge railway works affecting SW trains and stations though the journey by train still turned out to be far quicker than the outward journey on the Underground.