The Old School - Others Views

Having attended at a now long since closed boarding school as a pupil in what was then called the "B" stream I had assumed that most of the pupils in my year whether in the "A", "B" or "C" streams found it reasonably bearable.

In November 2017 there was a get together over dinner at the old place (now an hotel) by members of our year. The School closed in 1967 when our year was the last to leave. Interestingly although I was unable to attend the dinner following a  serious cycling accident - now recovered - most of the year members who are still living, attended, some 45 old boys. Surprisingly after so many years, friendships that were made at school in the 1960s have endured; several have died though including one in the 9/11 atrocity and another sadly earlier this month.

Following the death of Michael McGreal a few days ago there was a spate of emails firstly of course expressing sorrow and sadness at Michael's death and recalling incidents when we were all boys at the old place. Secondly though the emails moved on to life at the old school itself.

To my surprise many who I had regarded as strongly supportive of the school and who seemed to thrive there signified that in fact they loathed the place and some were bullied. One old friend wrote to me saying (names removed):

It was a great pity that you couldn’t get to the reunion because of your cycling injury, I was very reluctant to go as I felt it would dredge up too many memories and nostalgia but I am very glad I went. It was a great night, friendly and inclusive and it was good to see that most of us have turned into reasonably adequate human beings. Those in the C stream in particular all seem to be barristers, CEOs, businessmen and financiers which I’m sure would be a big surprise to those teaching them at the old school. For me it was a massive surprise to find out that the many of us had an unhappy time at the old school. During our time there it seemed to me that everyone else was confident, successful and happy and I thought I was the only one who was feeling repressed, inferior and out of my element, but it seems many others were feeling the same but none of us recognised it in the others. I met N... at the reunion, he was in the second eight with us although I hardly remember him at all from the old school. He hated his time at the old school and spent the whole time trying not to be noticed and in particular not to come to the attention of any of the Js. He has a farm near Newhaven and Anne and I sometimes call on him and his wife June for a meal if we are catching the Newhaven to Dieppe ferry. I have also been in contact with M... lately. It turns out that he had been working in Leeds which is close to where I was in Wakefield. I only found out when my daughter had a placement with him during her training as a clinical psychologist. M... was a consultant neurologist and neither of us knew that we lived so close to each other. I had lunch with him recently after he posted about the sad loss of his daughter with a heart condition. I’ve exchanged a few emails with N... as well. To my astonishment he ended up marrying a French girl and training as a GP in France! He worked in pharmaceutical research in Switzerland and is now relocating to France. Quite a few of us seem to live here, C... P... N... for example but I don’t see them. Anne and I live in the Charente, between Bordeaux and Cognac and you are most welcome to visit. N... and June  stayed for a night while passing through the area in September.

I feel that anything I achieved in life was in spite of the Js rather than thanks to them. Their job seemed to be to put us down, put obstacles in our way and tell us that we weren’t capable. There seemed to be a culture of preventing us trying what they felt we couldn’t achieve, even John ... who was a good and respected teacher was very reluctant to give me the extra maths coaching required to allow me to take Biology A level with Physics and Chemistry according to Beaumont rules. Luckily I was able to persuade him, and it gave me great delight when G... (may he R.I.P.) had to announce with a sour look on his face that I was receiving a prize for being accepted into Cambridge. In a way I have to thank him as he had literally sneered and scoffed when I told him my ambition and told me to forget about it, so I was determined to do it to prove him wrong. Classic reverse psychology I suppose but it wouldn’t work with everybody and I’m sure he didn’t mean it in any positive or benign way.

Still it would also appear that most of us turned out reasonably well eventually. Also it has to be said that education in post WWII Britain has since moved on considerably, so that for example, the dreaded ferula or beating of boys with a cane by the captain of the school have long since been outlawed. "A" "B" and "C" streaming of pupils  would these days, surely not  apply either.

Publishing a book seemed straightforward for my late mother who had umpteen published. For her second son however the process proved more di... 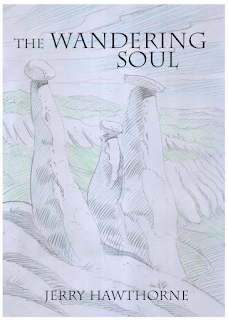 maytrees
Main non family or work interests are HCPT the Pilgrimage Trust; jogging the London Marathon six times so far and still trying 7th London Marathon completed in 2011. Great run but far from sub 4 hours! On 8th July 2012 I will be running the British 10k for Providence Row - Support is needed from all who read this. Please donate at: http://www.justgiving.com/JerryHawthorne