Having for the first time  purchased some Rwanda coffee from the local Sainsbury's  some research into that country's recent history seemed worthwhile.

According to the  label on the coffee beans' packet:

"...The world's first speciality coffee from Rwanda. Grown by Abahuzamugambi Ba Kawa...We began trading with (them) in 2002. They were just a small group of farmers, back then. Today they are a cooperative of 1,500."  (courtesy Unionroasted.com).

The coffee tastes delicious but the recent history of Rwanda has been turbulent and murderous. Hopefully  new beginnings including coffee exports will bring the country into far happier times.

History has never been my strong subject but an old article from the Daily Telegraph seems accurate:


By Mike Pflanz in Nairobi
4:55PM GMT 29 Nov 2009
The small central African country applied last year to join the group of 54 nations, all of which - aside from Mozambique - have historic links to Britain dating back to the colonial era.
Rwanda's President Paul Kagame has lobbied hard for his country to join the Commonwealth as part of a policy of moving towards the Anglophone world and away from the influence of France.
Rwanda was both a Belgian and French colony, but Mr Kagame has a long-running dispute with Paris over its alleged complicity in the 1994 genocide, which only ended when Mr Kagame's rebel army took control of the country.
"My government sees this accession as recognition of the tremendous progress this country has made in the last 15 years," said Louise Mushikiwabo, Rwanda's information minister, after Sunday's announcement at the Commonwealth heads of government meeting in Trinidad and Tobago.
"Rwandans are ready to seize economic, political, cultural and other opportunities offered by the Commonwealth network."
Following the announcement, France and Rwanda agreed to re-open diplomatic relations, a spokesman for France's President Nicolas Sarkozy said on Sunday.
Ties between the two countries have been strained since the 1994 genocide owing to Kigali's accusation that French forces trained extremist Hutu militia that carried out the killings, but Paris has repeatedly denied the charge.
The Commonwealth secretariat faced criticism from human rights activists for its decision because of alleged strong-arm policies by the Rwandan government.
Professor Yashpal Ghai, a Kenyan legal expert, argued that freedom of speech has been widely suppressed, the judiciary has "serious weaknesses" and political freedom is curtailed.
"We believe that overwhelming evidence, conveniently ignored by leading Commonwealth states, demonstrates that the government of Rwanda is not sufficiently committed to the protection of human rights and to democracy," he wrote in a report for the Commonwealth Human Rights Initiative.
Rwanda has denied these claims.
My recollection is that after the genocide in Rwanda, France was blamed for political weakness.  The nation  later applied to join the Commonwealth although it had never been a British colony. The application was accepted despite the latter part of the above newspaper comment.

Hopefully the country's human rights protection has improved since then. Certainly its safety and level of poverty have. 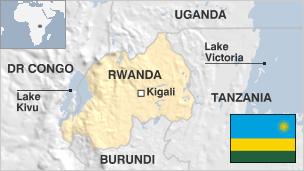