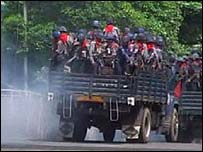 The pictures of military might being used with deadly force on the streets
of Rangoon to quell protestors are profoundly disturbing.
No country's government or politicians are perfect but a system of
government that depends on brute force to impose its will on
its unwilling citizens must be fundamentally flawed.

Sending an envoy from the UN to parley is right but what of neighbouring
China's view that the violence in Burma is an internal matter
for those peoples as it does not jeopardise peace outside its borders?

I would like to thank that the Chinese are wrong but in practice as
the use of military might by one nation to quash
malavolent military might in another
shows, huge bloodshed is usually the outcome.

More subtle resistance to such abhorrent regimes, like targeted sanctions
and boycotts, may take time and look less dramatic, but as their success
in South Africa illustrates, they can bring about the necessary changes
with a lot less bloodshed than sending the troops in.