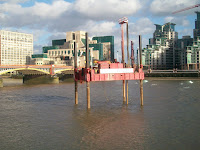 Autumnal sun, yellows orange and greens abound on the trees around the Thames path to the West of the North side of Vauxhall Bridge making the final stretch of the daily commute to the office actully quite enjoyable. The atmosphere is especially attractive when the tide is in and the Thames is still flowing backwards upstream as a result.

A novel feature of late is a large brilliant red drilling rig situated in the river just upstream of the MI5/6 building. The rig seems packed with many wonders of modern science incuding a number of aerials and satellite dishes etc. For a time its presence made for much speculation as to its purpose. An acquatic extension for the MI5 spies to practice upon perhaps; the government searchingfor oil maybe to make a start on paying down the huge national debt they have created but the reality turned out to be a more prosaic machine for facilitating the buiding of systems to reduce outfalls into the river during heavy rainstorms. Still James Bond always used to spin a yarn about his being an import/export line of business so who knows.


Hopefully the picture has downloaded. The current location of the drill is about a mile upstream of the Houses of Parliament Near to the Thames footpath at Rivermill.
EDIT Current 25th October 2009 view is now posted above