Democracy: Family and Debate (or Argument)

The UK elections this week and the referendum on whether to switch from our existing first past the post electoral system to the alternative vote electoral system, engendered much surprising argument mainly through emails by maytrees family members, relatives in-laws and outlaws, with extra interest arising from some of the latter or should I say in-laws being Scottish.

To protect the innocent names are omitted but here some quotes give the flavour:


1.  We're the only non-two party state in the world that still has first Past the post.2. First past the post only works fairly with a two-party state.3. Currently someone can easily become your MP with 70% of  your town voting for someone else.4. Hardly any young people now vote because they see no point - AV, in all the surveys appeals to young voters (for example L and O both support it).5. Many tories can see some sense in the UKIP position but can't currently vote UKIP as it would let a labour or Liberal candidate in. With second preference   UKIP will possibly become a major influence in UK politics. UKIP potentially can do for England/Wales what the SNP has done for Scotland - eg make us all   slightly richer.6. If you are left leaning then AV will also help Green's - its definately a second choice of many many many "caring" types - but also "RESPECT" might pick up a seat    or two (and why not?).7. The BNP are against AV as they are like marmite - you love or loath them - there is no in the middle so they will not pick up many second places (the second    right wing places will nearly always be UKIP).8. Vote AV as its what the next generation want.


That’s far too serious an e-mail to greet me on my return to work this morning.  Let’s lighten the tone.  I prefer this one : 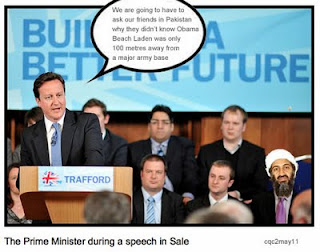 Your argument appears to amount to "I'm right  so won't brook any other viewpoint." (or 'specious' comes to mind)
I doubt that young people are all holding back from voting  simply because we do not have  an AV system. They are probably more  involved in other  more interesting things or in reality  prefer to let others decide. ....
For me the proof of the pudding is in the eating - dad's pudding is tried tested and British! Mine is not  quite the same but gives the same outcome.
Dads argument (anti-nazi) does not take into account that Australia had a bigger percentage death rate from WW1 (galipoli)  and WW2 (SE Asia against Japanese) and they are now AV - so they can claim they fought the nazi's even harder.. Australia quickly went into Iraq (I think faster than the UK). I'm pretty certain more Brits try to emigrate to Australia then Australians try to immigrate here.France has miles more immgrants then we do and Germany's manufacturing relies on vast numbers of Turks.Two things about the Nazis:a) If you bring nazi into an internet debate you automatically lose "Godwins" law of internet arguments:http://en.wikipedia.org/wiki/Godwin%27s_lawb) Its impossible to draw conclusions about the parallels of Germany as they were the losers of WW1. Back then we had the general strike of 1926 and even communist MPs in some major cities. If we had lost WW1 is a different argument altogether and not related to AV (just think of 1926 and then double it or triple it - that was germany). We can say that FPP gave us WW1 which was by far the biggest  political error a country has ever made - which wiped out quarter of the UKs 20 year olds and destroyed the UK as a world power for ever.
The remaining 23% of 'Don't Knows' would be split 14% to keeping AV on 2nd choices and 9% to PR, thus preventing progression to full Proportional Representation by giving the people what they "really" wanted.....;)
As an aside, my apathy for voting in General Elections extends to this referendum. Not for any lack of interest in politics itself, but because I've yet to be convinced there will be any noticeable difference to the way things are. I'll probably vote if we go to true PR, although I won't vote in any referendum for us to get there....
P.S. ..., yes, I firmly believe that anyone that is willing to make the effort to vote 'Don't Know' would also have a second choice of either 'Yes' or 'No' - that's the wonderful world of democracy for you and allowing any fool to have a vote....
And so on - there were dozens more posts and repartees which in the end proved very interesting whatever the result.
at May 07, 2011