Day job led to a trip to Dublin this week - Mrs maytrees own day job duty meant that I travelled alone which was a mixed blessing if that is the apt word as in her absence there was more opportunity than usual to chat with her sisters and  their children.

Apart from driving through the rather unattractive motorways around Dublin airport in January 2010 on the way to Kilkenny  it has been many years since I visited Dublin. The good news is that the people are as  welcoming as ever. Also despite the many betrayals suffered at the hands of a few  individual priests there are still many signs of thriving Catholicity though sadly there were apparently far fewer young people than before.

From the airport bus on  the  Tuesday the grounds around the  Our Lady of Lourdes Church, the 50th  anniversary of the construction of which banners proudly proclaimed,  were packed with well wishers. Morning prayers on Wednesday at 8am sung  compline-like by a small religious congregation of men  in a chapel near the ha'penny bridge were well attended by lay people as was the following mass. 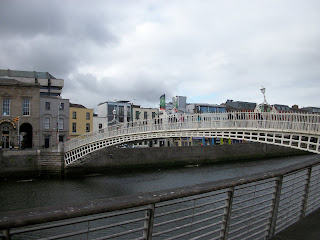 Mrs maytrees' sisters went out of their way to welcome; subsequent fish and chip supper together with husband and two children was a real treat. After day job work was complete on the Wednesday time for some sight seeing. On that front the changes have not all been for the better.  The IRA  blowing up Nelson's pillar in O'Connell Street  surely provided an opportunity for some imaginative thought and design before erecting a new public memorial or symbol? Instead Dublin Corporation's mandarins have put up what is to my eye at least, is  an huge and  hideous needle placed prominently  as if to remind the City's  recession hit population of the difficulties for rich men attaining the Kingdom of Heaven being greater than those of camels traveling through the said needle's eye. 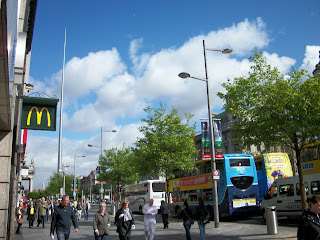 O'Connell Street itself as can be seen from the picture above also showing the needle, has been cleaned up somewhat though the result is little anodyne for my taste.

Elsewhere there are large numbers of new but often unlet/empty office blocks standing cheek by jowl with some of Dublin's glorious Georgian doorways. 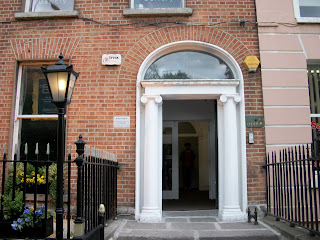 After a brief visit to the National Gallery - Jack Yeats paintings always worth pondering over - I took time out to read (Kindle) in the sunshine on Stephens Green: 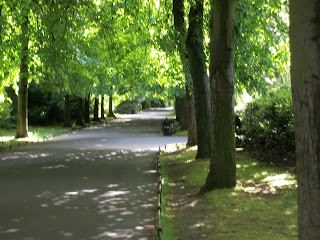 Thence onto Trinity College for student atmosphere (and price) lunch.
Overall though the signs of ostentatious spending I found detracted from the Dublin of old. Of course that criticism can always be made of progress without which the ordinary peoples' lives may remain stuck in a poorer past. Yet did Dublin's new trams have to be quite so top of the range and presumably expensive compared with say the ordinary looking trams on the Tramlink from Wimbledon? 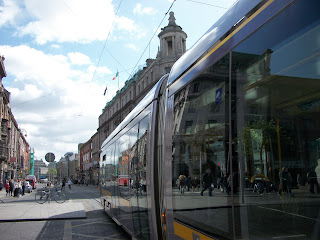 Overall: Cork which I have not visited recently  remains my favourite (from an architectctural/atmosphere viewpoint) Irish City but from a warmth of welcome which is really more important yardstick, Dublin is in a league of its own.

As a footnote I was amused at the ostentatious security inspecting of every drain and manhole cover in Dublin in readiness for visits by HM the Queen and the week after by  the POTUS.  After each inspection the drain covers were marked with  a dab of yellow paint. but there seemed nothing to prevent any ne'erdowell person interfering with a drain after being so marked but before the Visits. Any pot shot taking against either Visitor would of course be entirely against the wishes of the vast majority of the Irish population and hopefully the Visits  in their different ways will both  be really  successful.
at May 14, 2011