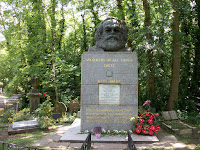 This and my last blogpost may be taken as a tourist guide to some of London's interesting places to visit. That is not intended to be the case. That impression would be more apparent than real as younger brother having just read Audrey Nifenegger's book Her Fearful Symmetry, suggested the trip to Highgate which was duly made with him, sister in law, mrs maytrees and myself yesterday.

Audrey Nifenegger had been a volunteer guide at Highgate West Cemetery which can only be visited as part of a guided group of 15 people. I have not read her book but assume that it was inspired by her work experiences at Highgate Cemetery.

Since last travelling from SW to N London the London Overground links have been substantially developed so we were able to take the train from Clapham Junction in the south to directly to Gospel Oak in the north and thus avoid using the dreaded Northern underground line. Clattering sounds on the roof of the train near near Willesden Junction slightly alarmed mrs maytrees but fears were allayed with some merriment by another passenger who explained that the pantograph was hooking up automatically to the overhead electric cables on the northern section of the route whereas South London still largely uses the electrified third rail on the ground.

Highgate Cemetery itself is fascinating. The East Cemetery can be visited without a guide.
Karl Marx is perhaps its most notable occupant although TV personalities like Jeremy Beadle have been lain to rest there too. My chance remark that I did not know that Jeremy Beadle had died was echoed by another visitor there at the time.

The West Cemetery is only accessible with a guide but our guide was very knowledgeable and articulate who in a previous generation might also have been described as a 'blue stocking' lady. The tour with her was fascinating and well worth the £7 fee. Everyone has their own memory highlights but one of the most thought provoking for me was the grave of Alexander Litvinenko. He was the Russian emigre poisoned by radioactive polonium 210 in London in 2006. The diplomatic spat arising from the Russians refusal to agree to extradite the suspected murderers at the time still rumbles on. The grave with its slightly (to my eye at least) naff photo in place of a headstone is unremarkable but the circumstances that led to his interment in a specially lead lined grave seem by contrast most remarkable. 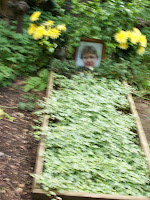 Touring the West cemetery with the guide stopping every few minutes to point to monuments of interest reminded me a little of doing the high stations of the cross at Lourdes, all the more so as most of the graves and monuments were adorned with crosses, angels and other Christian symbolism. The hill is much more overgrown in the West cemetery with a more wilderness feel than the steeper but more carefully laid out hill that Lourdes pilgrims making the high stations are accustmed to. A nice touch I thought was the description of "dissenters" given to internees who who were not of the CoE religion.

The guide took us to the graves of some of the pre-raphaelite artists: 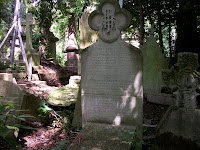 The BBC TV drama documentary depicting some of their lives and loves was broadcast a few months back. The BBC website thumbnail sketch reads:

It was in that summer Dante Gabriel Rossetti met his muse, Jane Morris, who was Jane Burden at the time, and who came to embody the Pre-Raphaelite ideal of beauty.
And at the same time she met her future husband, Rossetti's friend William Morris

The Egyptian style graves intrigued too: 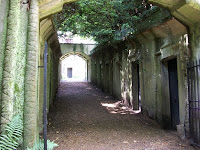 Posting other photos provides a little more of the atmosphere of the place: 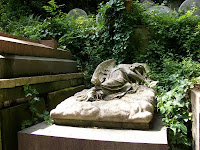 The above sculpture was according to the guide hewn out of a single piece of stone and is estimated to cost some £250,000 to replicate today. However although obviously many of those interred in Highgate Cemetery were undoubtedly from rich and famous families it was interesting to learn that also interred are many paupers and foundling babies although their remains tend not to be marked with monuments or headstones.

And a final view below: 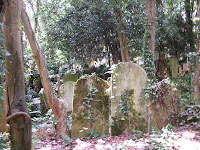