Increasing publicity about 'green' issues and the apparently deletrious effect on the planet of mankind's unbridled uses of resources formed the backdrop to the maytrees' visit to Kew Gardens last week.


Kew does not have the razzmataz feel of say The Eden Project in Cornwall but the atmosphere is one of concern for planet earth and work in preserving endangered botanical species for posterity. Essentially the Eden Project is more attractive a place to visit as a tourist whereas Kew Gardens seems to be more the place for serious botanical business and imparting the importance of that to its visitors. The price of admission to Kew had been fixed for decades by ancient statute at 1d.This converted to 1p at decimalisation of the UK currency representing a 200%+ increase. However the old laws must have been amended long since as on this visit the price of admission was about £15 - conservation comes at a price.

We did our bit for saving the planet by travelling too and from Kew by public transport although with a mixture of District Line, a replacement bus and then being decanted onto the new London Overground link at Gunnersbury, the way there was somewhat unpredictable. The saving the planet theme continued on arrival as the photograph of a mock up of the deforestation effect in a tiny part of the Amazon rainforest illustrates: 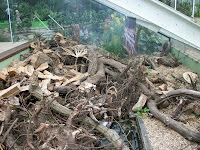 The new tree top walkway was probably constructed as a sop to tourists such as myself but the treetop view and perspective was well done and interesting: 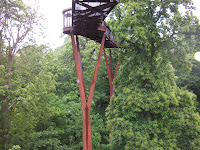 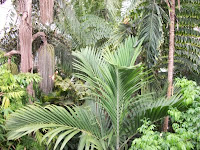 Some spring showers dampened some sights but the beauty of mother nature still shone through as did the magnificent Victorian greenhouse: 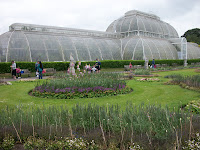 Overall the fact that people were working to conserve and preserve so much in the way of the earth's botanical marvels left one feeling slightly reassured. As against that the damage homo sapiens is undoubtedly causing to the planet perhaps more by insensitivity towards our environment than anything else, left not a little sadness. Nonetheless a worthwhile learning experience.
at June 05, 2011