World wide trials and tribulations   in 2011  have been such for mankind  that I thought that I would post an English Christmasy chocolate boxy type photo here as a microscopic antidote to represent peace and love - something like a robin sitting on a garden fork  in the frost. But whilst making coffee in Wimbledon this morning  (Christmas Eve 2011) I spied the most unrobin-like bird through the kitchen window so the piccie below is posted instead: 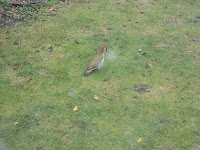 Not a brilliant photo (taken through a dusty kitchen window with no preparation possible) and certainly no robin redbreast is depicted. I surmise too that the bird  is not normally regarded as  a native of England. Yet perhaps this poorly taken picture of a strange looking   yet dignified, creature scratching  around for food on a winter's day in a foreign land, represents something of  the  present states  of mankind and the planet.

Maybe its very survival owes something to global warming as from its highly coloured feathers, I'd hazard a guess that it is more at a home in tropical climes than in darkest SW19/20.

A Very Happy or as our American PP would say Merry and Holy Christmas to all who visit this blog.
at December 24, 2011