Red Alert and Other Digital Gadgets

British Gas which supplies both electricity and gas to the maytrees' household has for years tried unsuccessfully to persuade us to delve into the darkness of the cupboard under the stairs to read the meters. Apart from the fact that the meters were hidden under an array of vacuum cleaners, shopping bags and other clutter, one needed to bend back breakingly almost double with a torch to reach the required level and then squint to try decipher the array of dials and numbers. All the skill and acumen of WWII Cheltenham Room 40 code breakers was required to write or email the results to British Gas each quarter.

Last month however British gas offered to supply and install free of charge,a new digital device that automatically reads the meters and reports the results back to their HQ. The device also provides constant information showing the amount of energy being consumed at any given moment or period of time and displays green amber and red alert signals to give an indication of the amount of energy including thermal units, being consumed upon switching household appliances on and off. Apparently, so the scientists report, energy consumption declines by c. 10% in those households which have this new digital-type of meter reader. Ours looks like this: 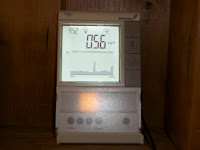 Just before taking the photograph above I had switched on the coffee filter machine so the meter's code green switched to code amber.

Of other wonders of modern science; the  Kindle e-book reader is equally successful  for me though judging by those being read by fellow passengers on the daily District Line commute, mine already looks out of date - theirs look sleek and have touch screens and I gather those in the USA have the Fire version which is far more versatile. Mine is very chunky by comparison, still has a tiny keyboard and no touch screen. The demise of local book shops may be being caused by the very handiness of e-books, so is  sad if not worrying and given that many   e-books can be bought for 99p or less I also wonder about the ability of authors to make a decent living.

Mobile phones have not proved very useful for me so far but this may be because I cannot be troubled to turn mine on very often. Obviously the world at large has taken to them to such an extent that many find mobile phones indispensable almost obsessively so. The Iphone in particular appears to have taken the younger generation by storm. Admittedly the Iphone and Ipad look sleek and attractive but are they really worth having? There was a discussion at the day job office yesterday following the revelation that David Cameron texted the letters LoL believing that to be the abbreviation for 'Lots of Love' whereas as every 20 something knows, the letters actually signify ' Laugh out Loud'. Yet a 20 something colleague pointed out that such remote digital communication practices were affecting negatively, some aspects face to face socialising - for example young people might actually say "lol lol" face to face  rather than really laugh.

The over use of social networking sites may be adversely affecting people's interpersonal skills and sensitivities in face to face gatherings. Also I still worry about the microwaves that are required to keep many of these devices in touch. Are they presenting health hazards which will only become apparent 20 years or so down the line?
at May 12, 2012