The  last time I visited the old Wembley was in 1988 for the old Wimbledon v Liverpool FA cup final (Wimbledon won 1:0) yet the Olympic atmosphere was very different and far more colourful and fun. There were flags obviously mainly from Japan and the USA but also many children and more women supporters than I have ever seen at a football match. The national dresses worn especially  by some Japanese supporters were beautiful to behold: 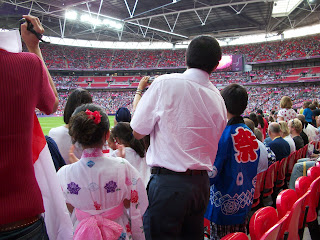 This Japanese family was in the row in front of us.

The atmosphere was carnival like but also deadly serious on the pitch. The Japanese in my view had more prowess football strategy-wise but the USA team were faster runners being it appeared some 3 inches taller than their Japanese rivals. 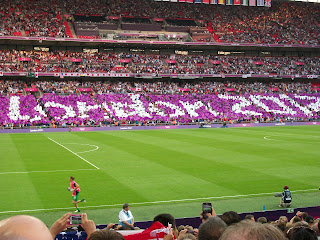 Chris and Louise accompanied me (Mrs maytrees not being a football fan) and they too loved the evening: The USA won the gold medal, just winning the match in an exciting 2 - 1 finish. The Japanese almost scored two more goals hitting the cross bar on each occasion.

It was great too  that the Canadians managed to travel to Wembley from their Bronze medal match in Coventry in time for a very loud  and musical medal ceremony.

Interesting as the Independent Newspaper reported this morning that there were some boos for the FIFA  Swiss president who was presenting medals, as not only has his attitude to women's football  seemed quite chauvinistic but also questions have been asked about the award of the 2022 World Cup  to Qatar.

A  photo from the exciting match itself: 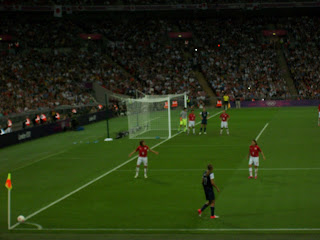 And the medal ceremony: 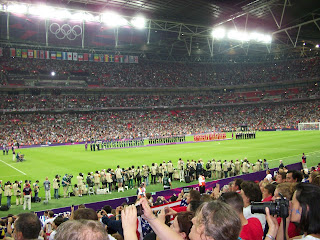 It was good too to see a young American woman hold up a banner of thanks for a great Olympics - I agree entirely.