Before the Games began there was typically the usual British scepticism - the cost, the London focus, the minority type sporting events, the weather and of course the politics.

Looking back, one of the  events which changed the public mood from that of scepticism to interest and then enthusiasm, was I think the Olympic torch relay around the whole country and even  beyond.  This was far more appreciated than even the Olympic organisers had envisaged, so much so that sometimes crowds were many people deep. This was reflected   in London just before the Games commenced so for example, people from the office spent an hour or so at a spectacular viewing position just under Chelsea Bridge as the  boats carrying the Olympic torch and  flame passed down stream on their way to the Olympic Park.

Locally  in SW19 and SW20 too, there were some improvements made for example around Wimbledon Station including  the erection  of a new   and in my view attractive sculpture  of a stag facing up to Wimbledon Common, where such animals apparently  used to roam - they still  of course roam  the other side of Putney Heath in Richmond Park: 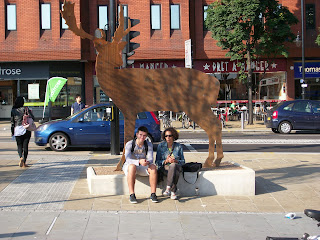 Local girl Sophie Hosking's gold medal in the lightweight women's double skulls has been commemorated by gold paint replacing the customary red on a local pillar box outside Elys in Wimbledon: 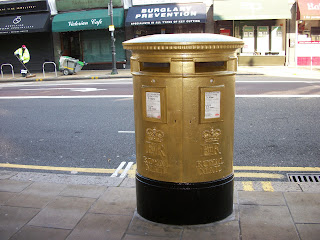 But   such local signs though welcome are small compared with,  the international excitement, colour and huge interest being caused by the London 2012  Olympic Games,  which in my view  have had the effect of providing stirring reminders  to everyone of human   potential and  achievement, in times when the general  news is otherwise so dire.

The two or three week break from more sobering news has in my opinion been  wonderful.
at August 11, 2012