For years the RCA Secret invitations to attend their exhibitions of art students' past and present works have been arriving. As a virtual  philistine I have always known that going to such an exhibition would be worthwhile but equally as a philistine being too busy or tired or etc to attend has been my reaction.

This year though as the snow fell and wind blew on this grey Saturday March morning I decided that even the most fervent artists would give it a miss making a visit  by a  non artistic type like yours truly  less difficult.

In the event the first main difficulties were to determine where the RCA HQ is and how best to get there. In fact the Royal College of Art now  has a  new spacious centre in Battersea. I decided therefore to take the train to Battersea Park. This  proved in theory to be a mistake as the East side of the Park is quite away from the RCA. In practice though walking through the park as the snow blew down was invigourating and fun.

As for non-artistic types being able to breeze through the exhibition while  artists and art lovers  froze at home - how wrong I was. The queues to access the RCA rambled outside of the building and round the block.  However the snow and cold were soon  relegated to background by others in the queue who engaged in dynamic and interesting conversation in which I was soon caught up. The two and a half hour wait two hours of which were in a snow storm, sped by rapidly. Only when I gained access to  the RCA building did realisation set in about freezing hands  and feet. One fellow queuer was from  Australia her family having emigrated there from Co. Mayo in Ireland; another was  by coincidence  from the same London Borough as my parental family home. She was accompanied by her tiny 3 month old baby who as it happens was born at the same NHS hospital as maytrees max ma mi and min.  Her baby girl slept soundly during the whole queuing time. Unlike the two fellow  queuers however I had not done any homework about which picture to try to buy  although judging by the number of paintings  that had been sold before I made it to the front of the queue, which ones to go for was in the event  probably almost as much as a lottery for them as for me.

Here are two that I purchased anyway: 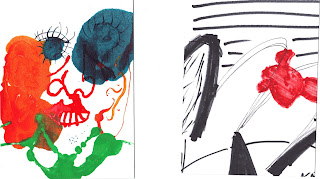 The RCA blurb about their exhibition states:

Ever wondered if you could spot a Paula Rego at 20 paces? How about a David Bailey? Each postcard in RCA Secret is signed only on the back, so collectors won’t know the identity of the artists until they have made their purchases.
We’re giving you nine days to check out this eclectic collection and then for one day only the cards will be sold to support the RCA Fine Art Student Award Fund. With generous contributions of new work from hundreds of leading international artists and designers, RCA Secret continues to help emerging artists at a formative stage in their careers. So whether you walk away with a famous name or not, you’ll be buying a bit of history and contributing to the future.
Each postcard costs £45 and a maximum of four cards may be purchased per person. Postcards are only available to purchase in person at the Sale. You must have an RCA Secret Collector's Number to purchase a card at RCA Secret 2013. Register HERE to get one