There were only 6 of us including our 30 year old chaplain Francis and 16 year old Wimbledon College student Jo, in  auxiliary HCPT Group 729 for our Easter 2013 Pilgrimage to Lourdes though of course including us 6, the HCPT pilgrimage totaled about 5000 people most of whom were in their 20s or younger..

The chartered couchette train from Calais to Gare de Lourdes was some 18 carriages long and is full of HCPT pilgrims. The journey for groups 35 and 729, started at Donhead on Easter Sunday at noon  and we arrived at the Gare de Lourdes on Easter Monday some 24 hours later. 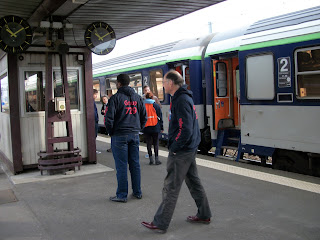 The beach at St Jean de Luz which we traveled to  on Wednesday for our away day from Lourdes was fun and sunny  whereas Lourdes itself was  often cold and snowy. 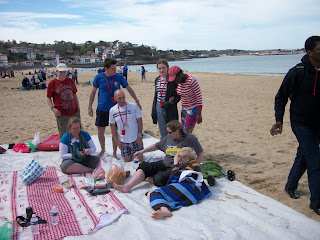 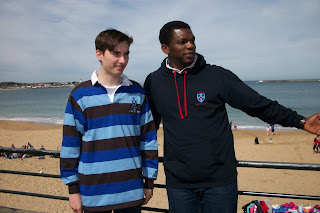 The pilgrimage was gloriously, holy, funny, refreshing and interesting usually simultaneously. New experiences  even after more than 40 years of  traveling with the HCPT, abounded. 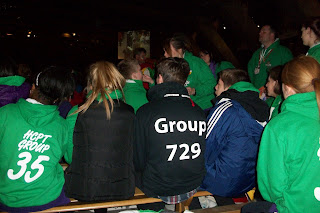 We were one occasion trapped by a sudden thunderstorm in the small but beautiful new  Ukrainian Catholic Church in Lourdes  that I had seen but never visited before and on another occasion were asked to help judge a children's group dancing competition one night. Meeting people from Bosnia and Plymouth and sharing tales of different daily lives at home maybe over a glass of wine were common experiences. One  story  was of a young nurse who worked for the RN I think, in emergency medical theatres set up only a couple of miles from military front lines and another story was of the difficulties facing parents bringing up autistic children in eastern Europe.


The photo below  illustrates that   the week was  also  refreshing and fun. 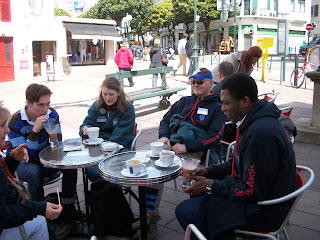