Very recently it was astonishing to receive from HCPT HQ news of serious floods that have just hit Lourdes. The photos and film clips of the floods that I have seen so far indicate that they are far worse than those of October  2012. As it happens the HCPT Group 729 deputy group leader and myself traveled out to Lourdes at the end of October 2012 for a long week end retreat at nearby Hosanna House. The floods then had abated and the whole  domaine cleaned up. A bridge had been damaged and had been closed but apart from that and the absence  of the usual lush green grass on the  prairie  the workers and volunteers had then competed an amazing clean up in a few days.

The Group 729 hotel (Hotel Alba) sent a reassuring note to the effect that only their basement had been hit but that even that was being cleaned up.  Anyway the Alba and the other Lourdes hotels   were 100% back in business   when the next full HCPT pilgrimage took place during  Easter Week 2013.

This time (June 2013) the floods were apparently far worse. Indeed the photograph below   depicts part of the rear administrative quarters of the Alba whilst in the foreground showing a French  rescue team attending upon a smaller hotel in a side street just  behind the Alba: 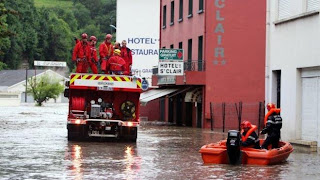 HCPT HQ reported as follows at the time: Thursday 13th June 2013 Dear..., Many of you will have seen the awful pictures of Lourdes as the waters rose during the course of yesterday. It is clear that the water level has now surpassed the level reached last October when the town was last struck in this way. On that occasion the waters extended from the Grotto area some way up towards the arches but did not go beyond them. This year the water has gone beyond the arches, with the area to the foot of the steps of the Rosary Basilica covered. Last year buildings on the Rue du Paradis were affected (ie the major hotels such as the Paradis and Arcades) whereas this year we understand that the opposite side of the river has also been affected... A message is being sent on behalf of the Trust to all the hotels that the Trust usually uses, as well as many of the cafes that our groups tend to frequent, offering our sympathy for what they are once again enduring. We have two HCPT groups currently on pilgrimage in Hosanna House (Gps 579 and 516) and we know that they will be praying for those affected on behalf of all of us. We would ask you and your groups to join them in remembering in your prayers all those whose lives have once again been turned upside down, including those great and small whose livelihoods have been put at risk. With sad wishes from your HQ team in Rugby, ... Latest official update from the Sanctuary (11am today) - The situation is more critical than ever. In the Basilica of St. Pius X the altar is completely covered with water. The St. Joseph Chapel is also submerged. The damage is much worst than during the floods in October 2012. It is impossible to figure out at the moment but we fear the worst. The disaster is such that the Minister of the Interior and the Minister of Ecology, Sustainable Development and Energy are coming to Lourdes. They will see the damage from the Saint-Michel gate. I am sure that the volunteers and other workers will work hard once more to clear up the mud debris and water from these serious floods but their work will surely be hard and take rather longer than last year. The facts of the floods in Lourdes being the worst that I can ever recall and that these occurred during the beginning of what is supposed to be the summer in France raises the whole question of the effects of what is called "global warming"

Just seen this photo of the Alba (courtesy and thank you 'Limerick Leader'):