There is so much  dire bad and sad news in the world at present, which reasonable newspapers are reporting on that this blog post today at least concentrates  on  a local improvement in London life that though significant for many in the area, is hardly the stuff of C21 newspapers and other media  reports, namely the new Boris buses introduced to bus route 24 this week.

The 24 bus  route runs from Pimlico to Hampstead. For a while I think prior to the first London Mayor Ken Livingstone being elected, the route 24 buses were the only London buses not painted red. They were as I recollect a rather hideous green and white but thankfully one of the major improvements arising from the institution of the office of  London Mayor was and is a huge improvement in public transport,

Last week the route 24 became the first route to run 100%   the new Northern Ireland made Boris Bus. The new buses I think are intrinsically pretty good and far better than those used a few years back. The new bus looks like: 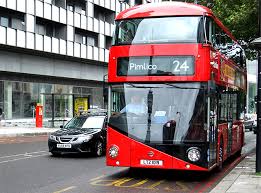 Time will tell if the new vehicle is reliable  but meanwhile the Streets of SW1 are  brighter this week than last.

I decided to travel on one of the new buses on route 24 since posting the above to make the post slightly less academic. 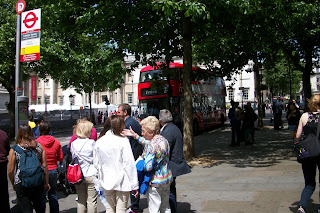 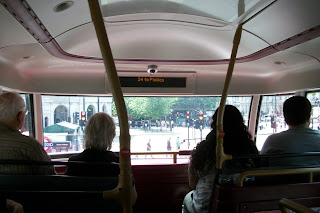 London was packed with tourists already and the Summer holiday season has not yet even begun.
The 24 bus itself was crowded and amazingly for London, actually air conditioned although the air conditioning noise on the upper deck was loud rather more so than the bus engine which was almost quiet.

There was a conductor on board though quite what his job is was difficult to fathom as  Oyster cards passes were compulsory and their press zones were everywhere.