My Longest blog post since starting this blog but worthwhile I hope:

10 days in the USA principally to visit maytrees min whose employer kindly agreed to pay  return the air fare although her stay in the USA is only for 8 or so months. The journey out  was via  New York JFK airport and the return trip was from Philadelphia airport.

Maytrees max predicted (I think)  that I would not really enjoy New York but in fact my time there was brilliant. Staying in an hotel near to Central Park I achieved an ambition of running a circuit about 6 miles I think  of the Park which including the run on the pavements (or I should say 'side walks') to and from the hotel took about 1 hour 10 minutes - a fraction longer than my usual Sunday morning Wimbledon Common run. Amazingly On Thursday when I ran, the sun was shining and there was a spring like quality about Central Park. However the next day the snow fell heavily transforming the scene to that of mid-winter. 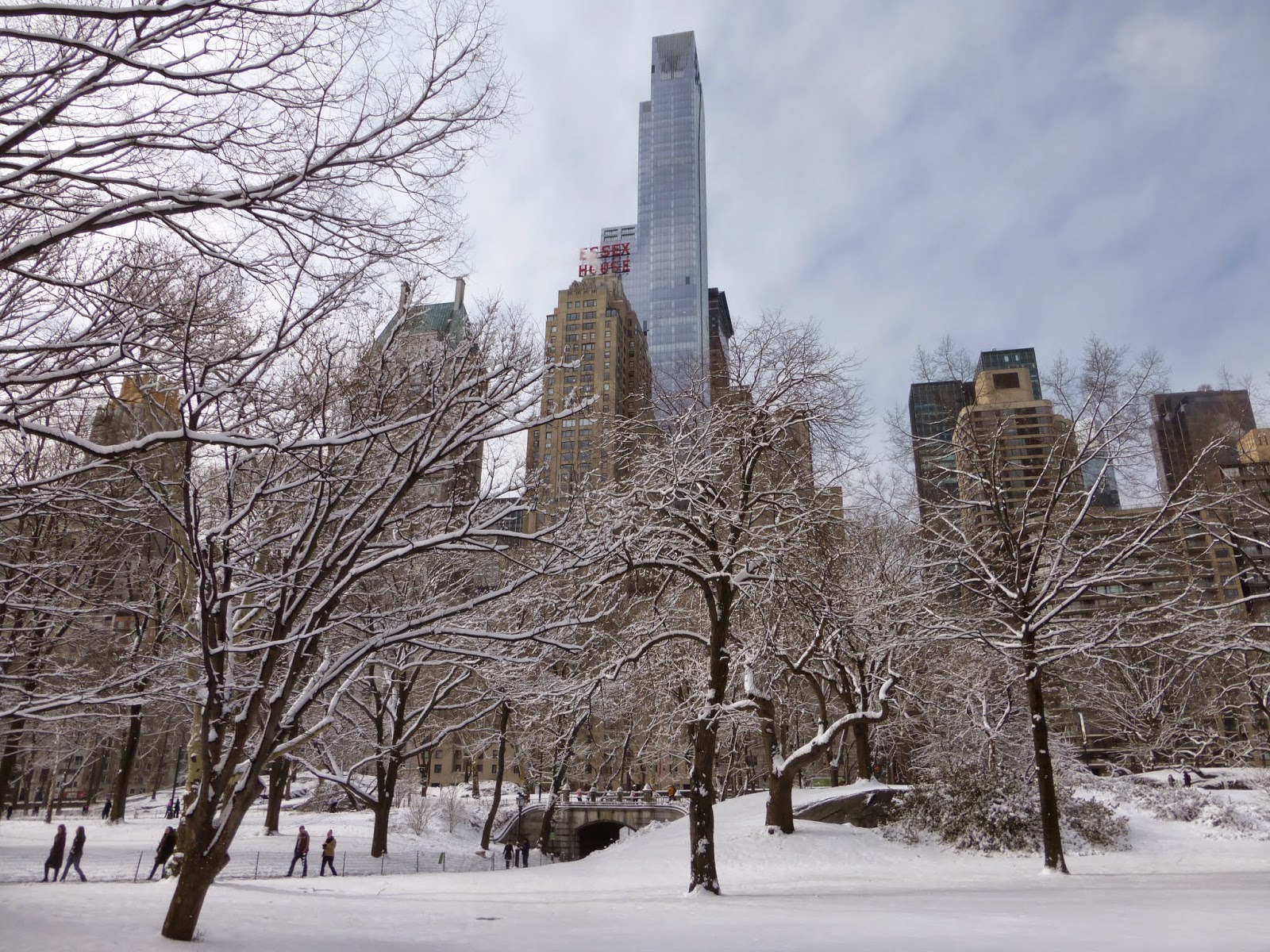 Another great New York open space albeit unlike Central Park,  is a long and thin one namely The High line - an old disused railway converted into  a longish  elevated walk from the Meatpacking District. The best time there was early in the day, away from crowds but I re-visited  one afternoon with maytrees min upon her making a day trip up to New York. 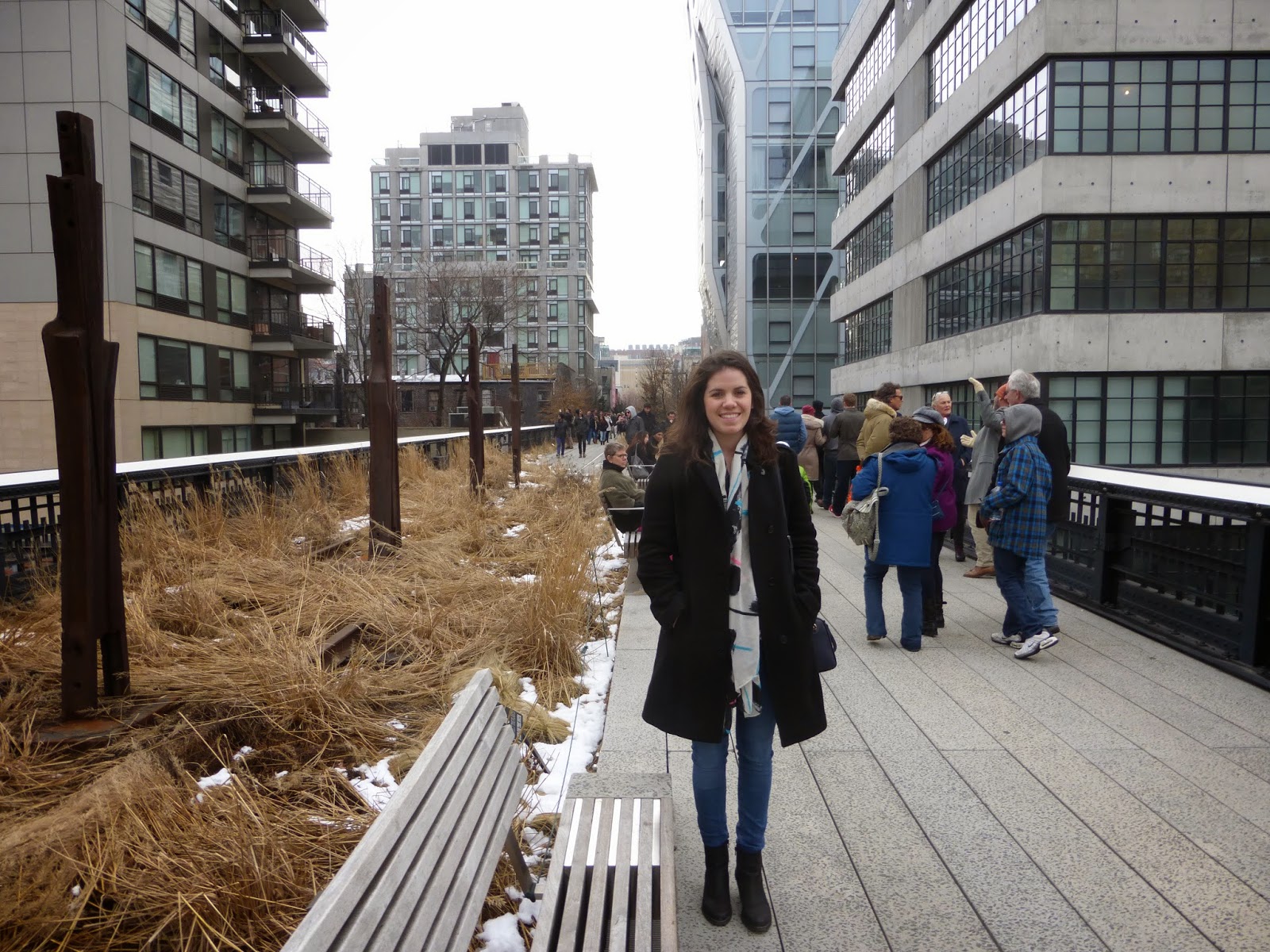 Brooklyn Bridge made for a pleasant walk though I did not appreciate until crossing the bridge that it is the world's first suspension bridge. 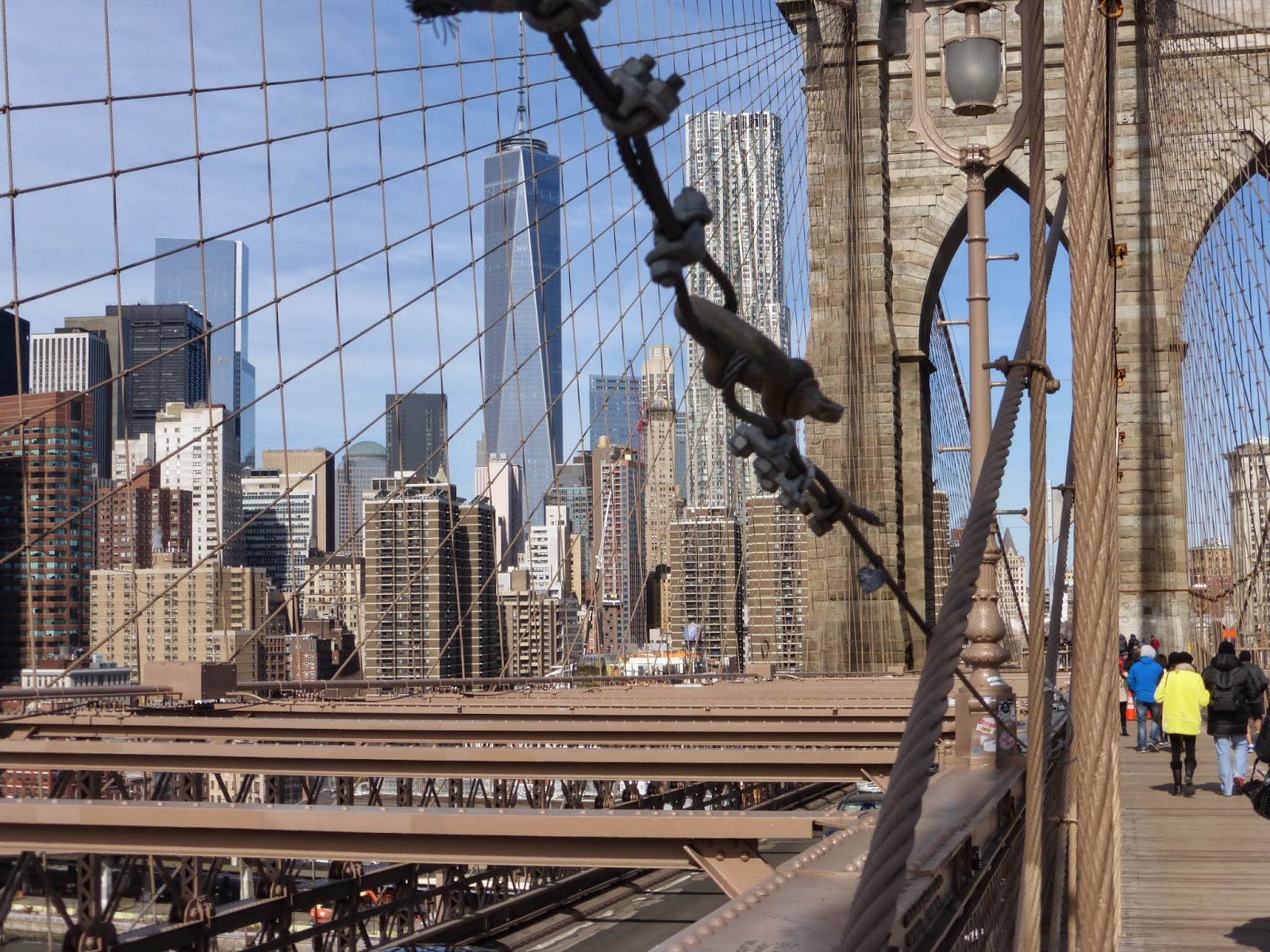 The Statue of Liberty at least needed to be seen though I was not attracted to visit it  which would take  much of a  day and be vast cost. My Lonely Planet guide book  for some reason did not mention the Staten Island Ferry which I found surprising as the ferry is free of cost and  goes right past the Statue of Liberty though the choppy water meant taking a decent photo was slightly difficult. 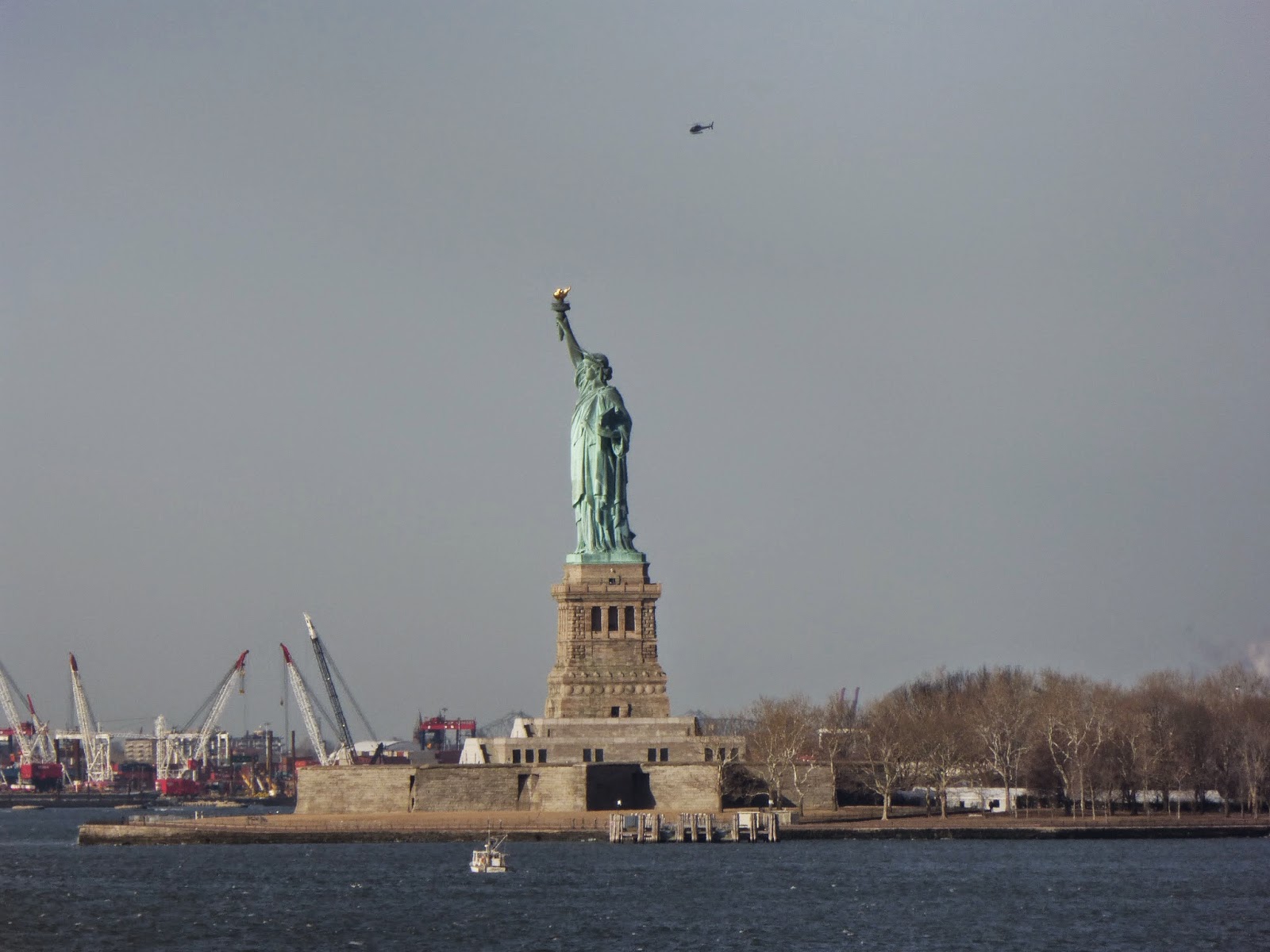 Also to be had  was a good photo of  Manhattan but taking pictures from the ferry deck was slightly precarious and freezing cold. 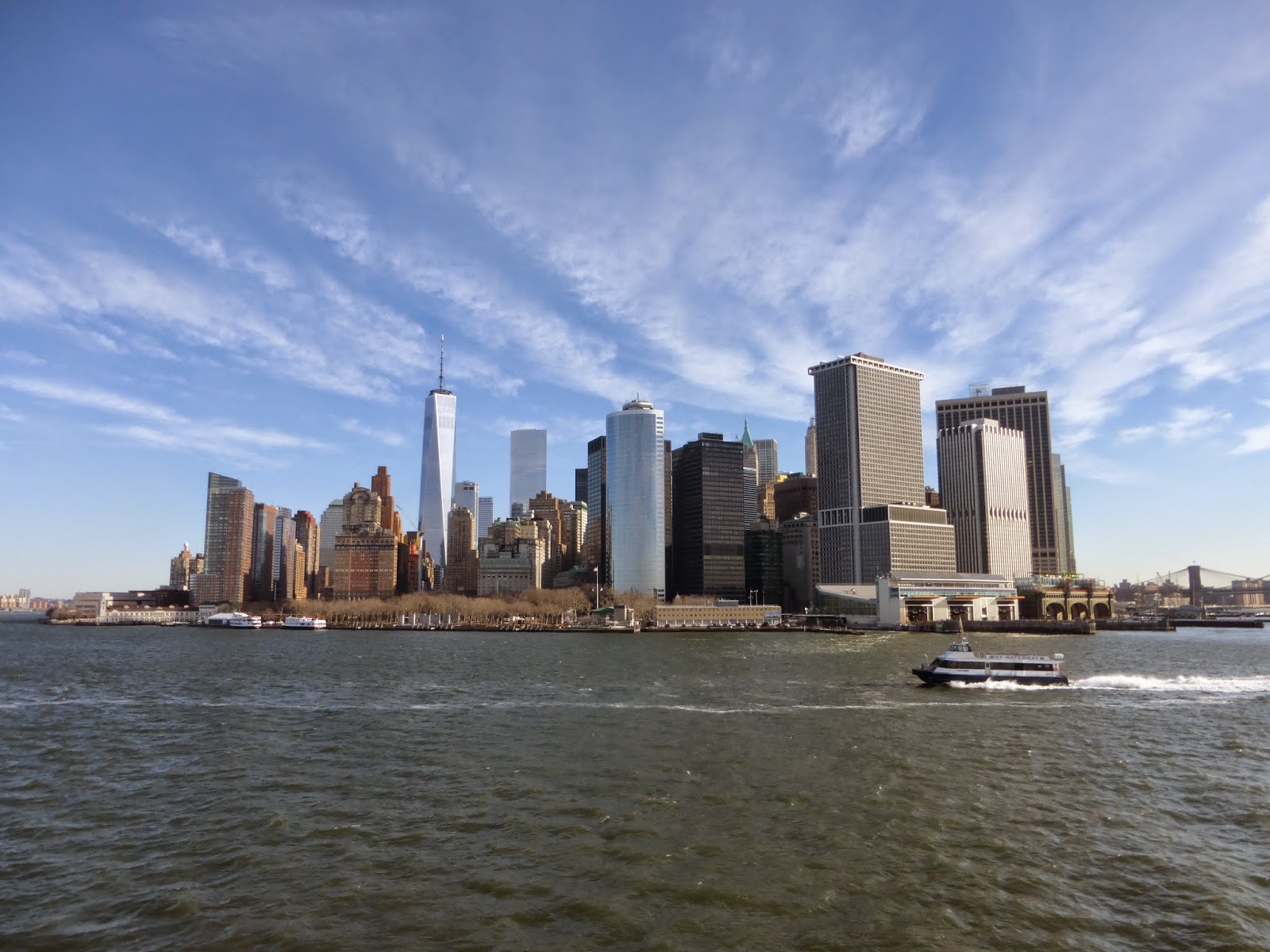 Grand Central Station was a delight though my photograph below  does not do it justice. By contrast Penn Station was really a dreadful mess and should be razed to the ground and started over again. Indeed the subway system though efficient and cheaper than the London Tube does need to be brought into C21. Its hard plastic seats many dank dark exit steps, dreary stations and poorly illustrated maps in carriages do not compare well with  the London Underground. Yet everyone I met there was friendly and helpful when directions  etc were sought. 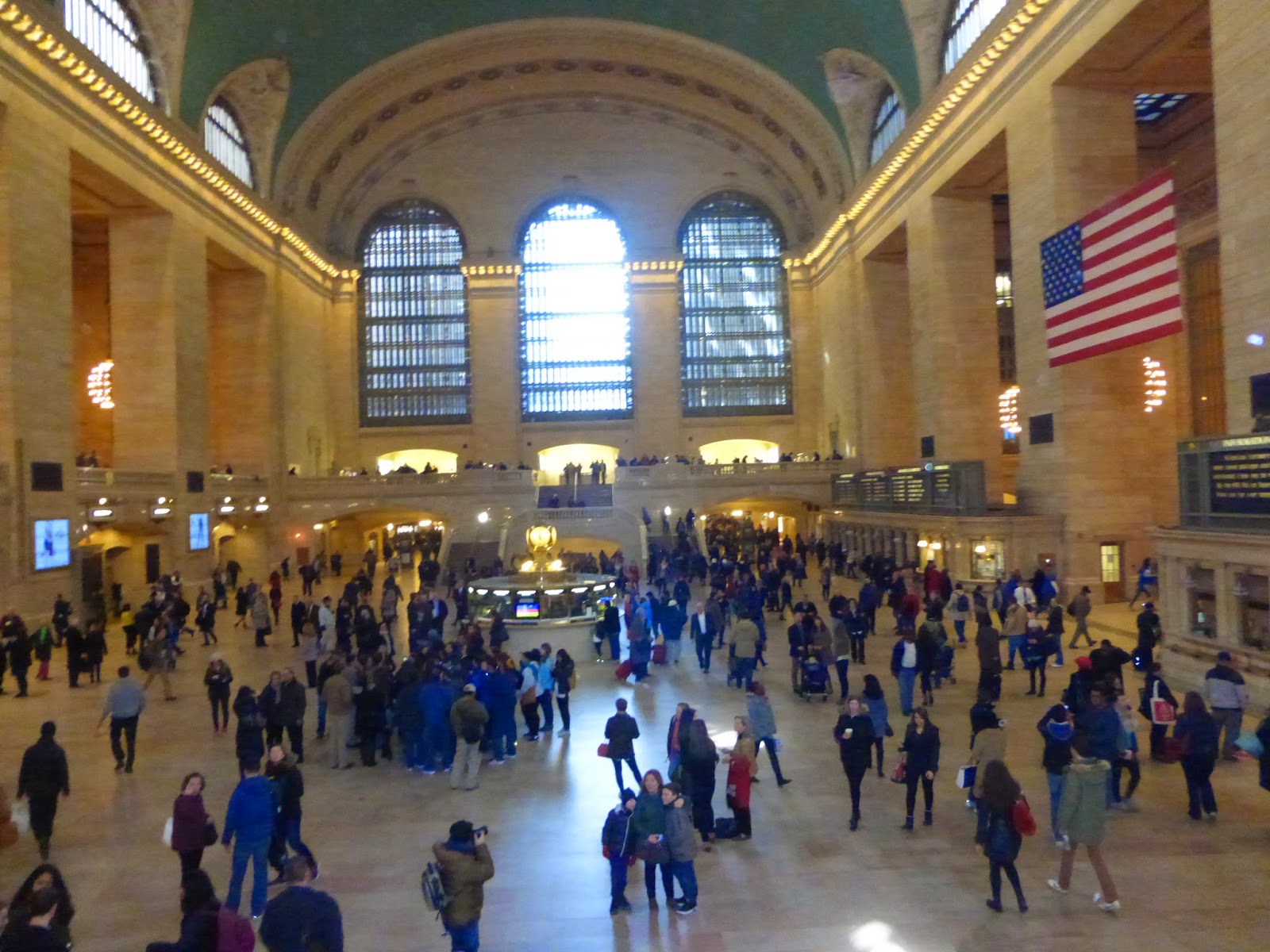 I also visited the 9/11 memorial sites which were impressive and respectful.

There is much more to be written about NY  but suffice it to say that it is a dynamic, interesting and surprisingly friendly place. So on to Washington DC. Train from Penn Central was crowded but the longish journey was comfortable enough. Washington is a city which probably appeals to those who enjoy grand monuments and large scale planning. For me grand monuments become interesting  when they are ancient such as the step pyramids at Saqqara Egypt Ancient Egypt but to Americans today those at Washington DC are clearly important. The White House is attractive 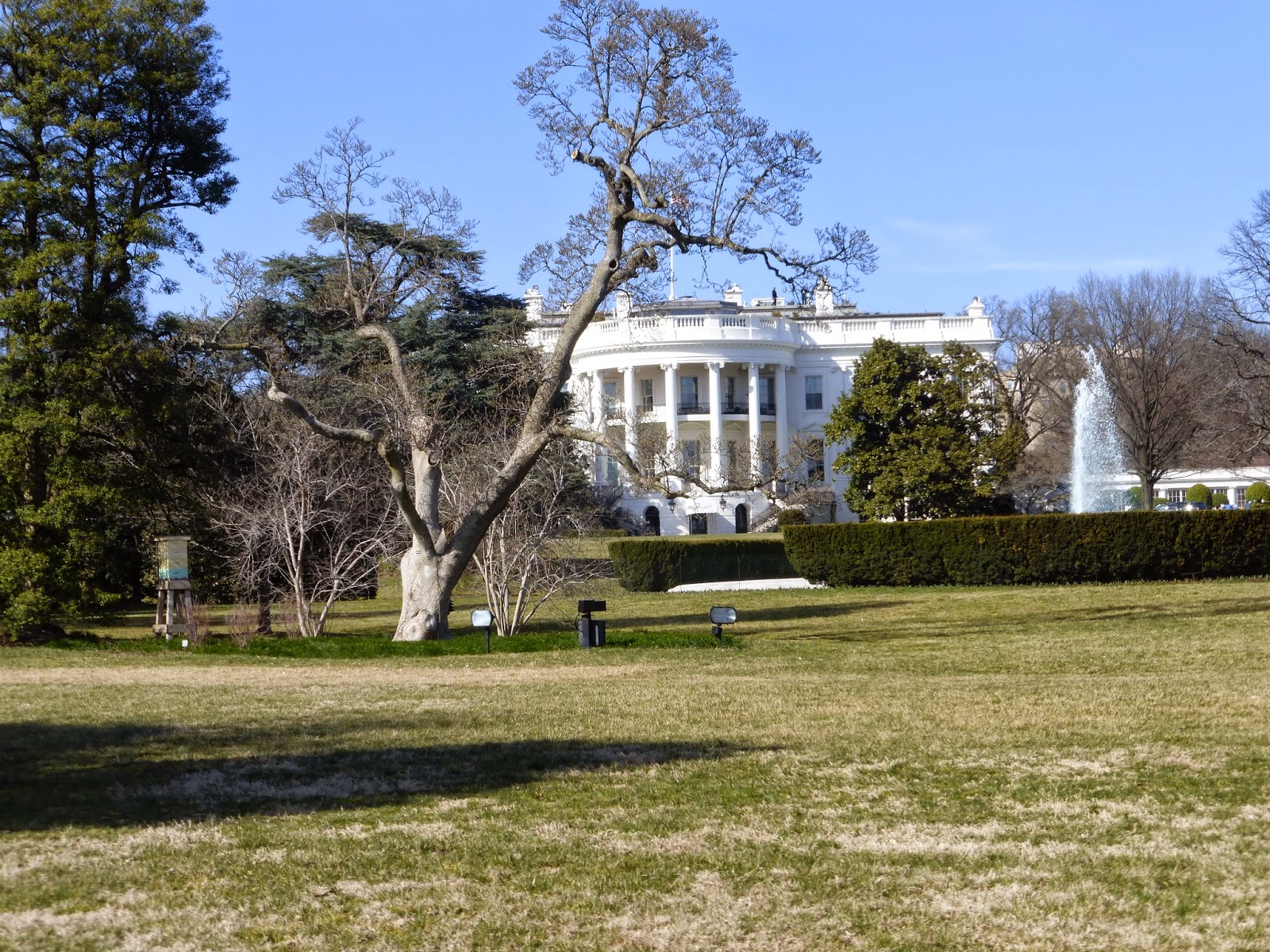 As are the Capitol which I was able to visit  (see photo below) and the Supreme  Court which being a Sunday I was not. 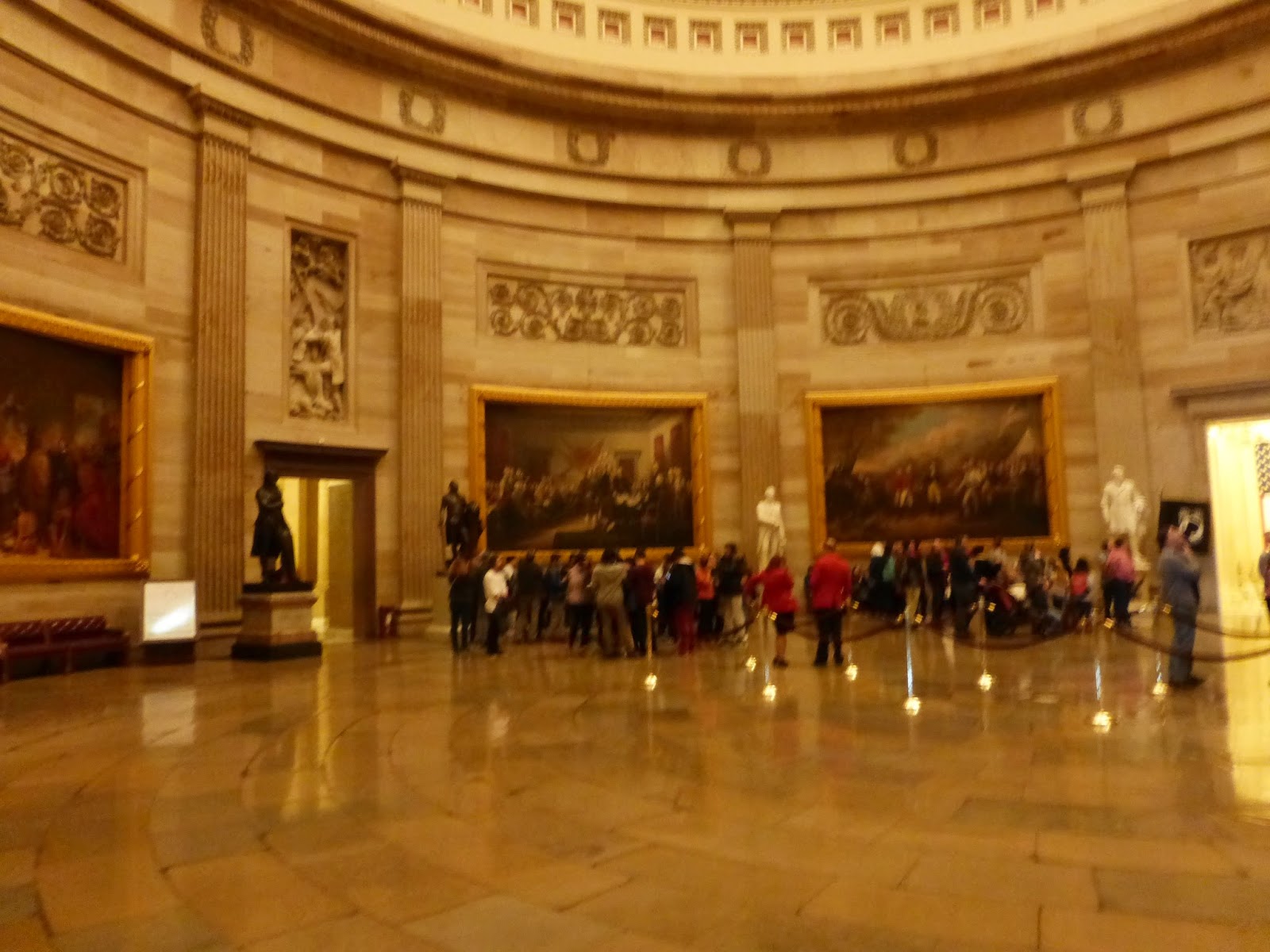 Georgetown was lovely. Interestingly the home of  John Kennedy and his wife Jackie, before  John  became president of the USA,  in Georgetown, was not marked in anyway even by one of those blue plaques used in England to locate places where interesting characters have lived. I believe though that the photograph below does depict their early home. 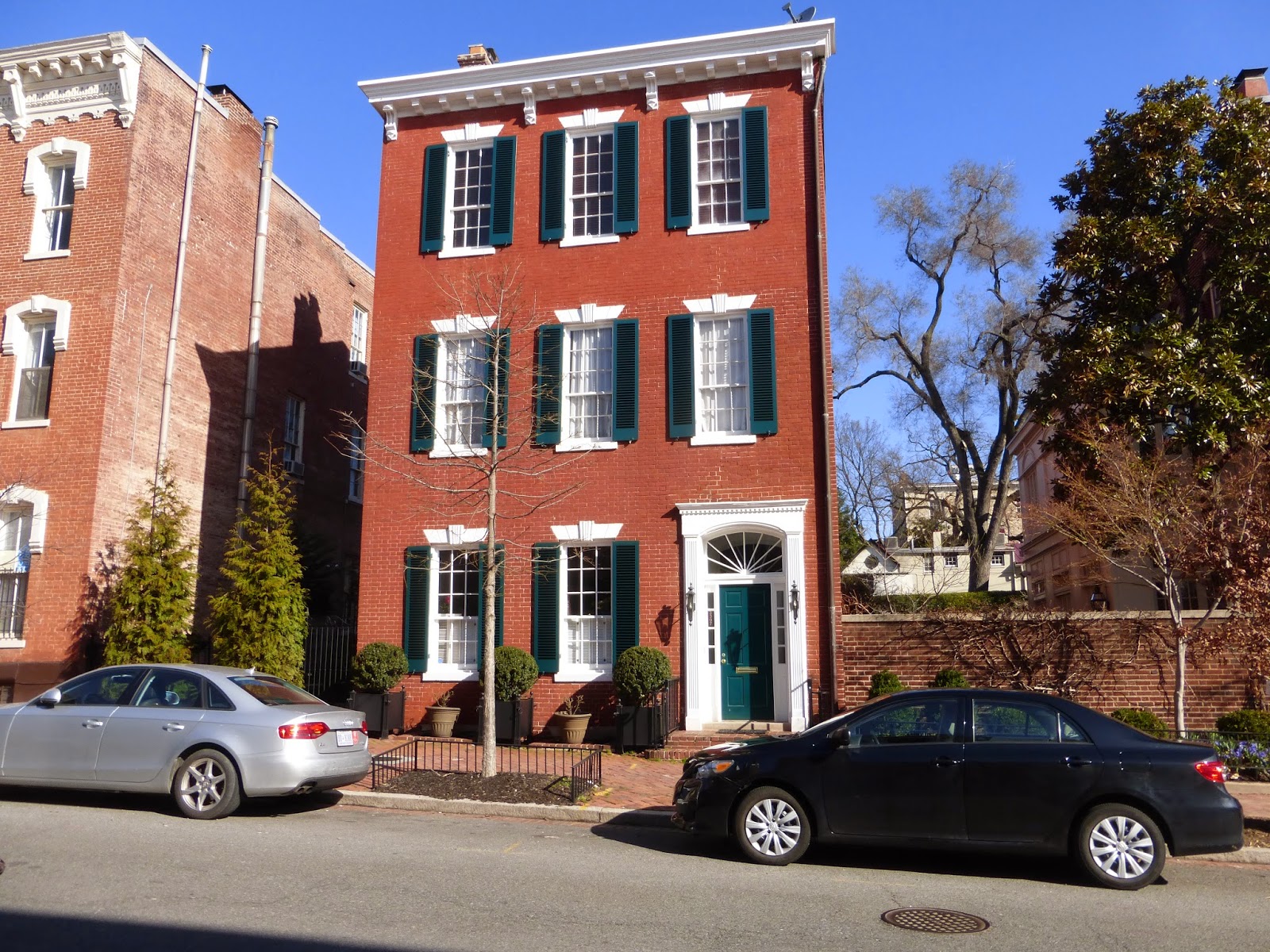 To me Georgetown was akin to a pretty English village though Georgetown coffee is far better. 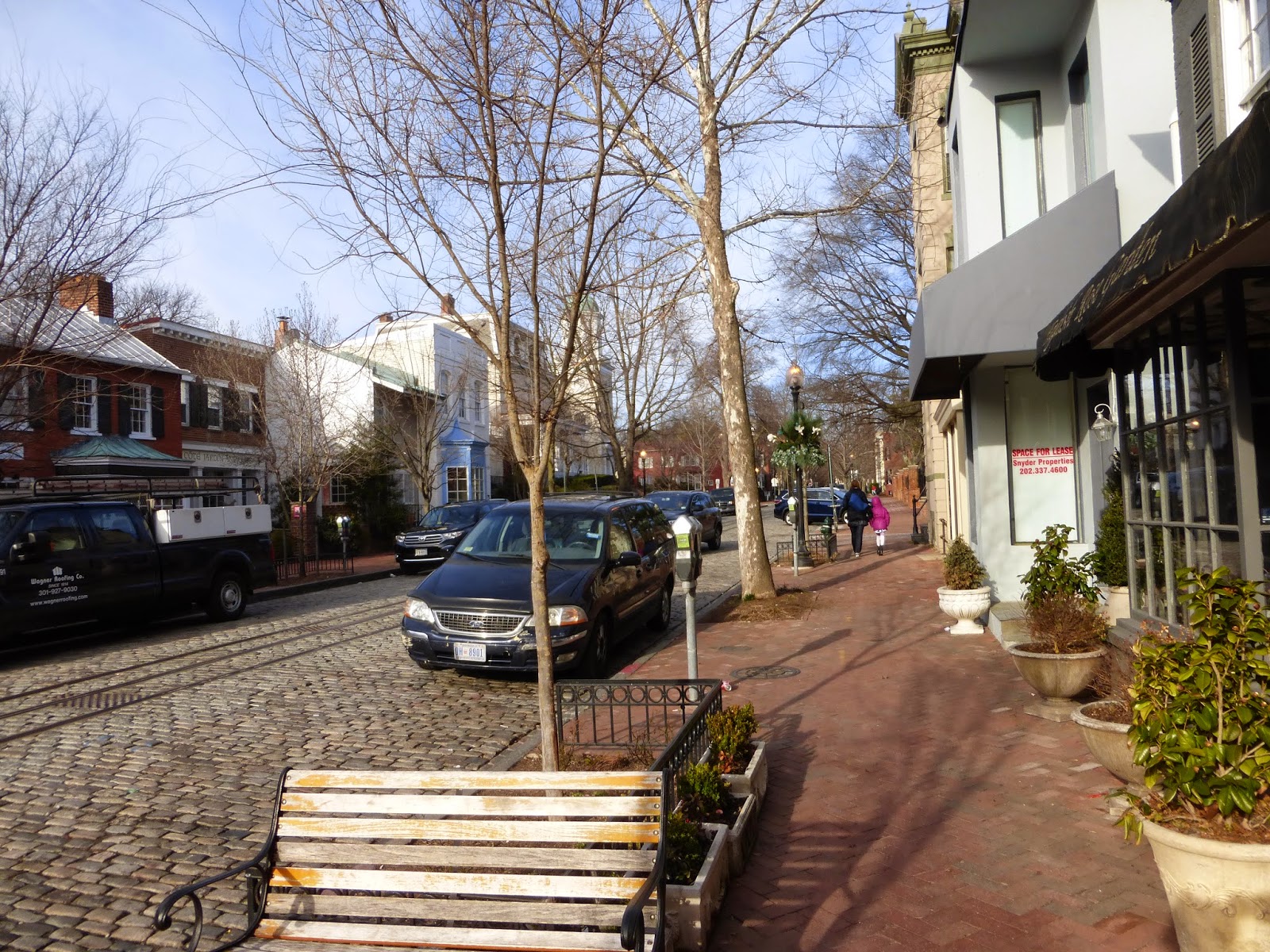 So finally to Philadelphia and to stay a few days with maytrees min in her very smart apartment (flat)  near to the  old town hall.

Again Amtrack was fast  and this time quite uncrowded. Philadelphia is a city which has a whole host of museums sculptures and galleries many of which   focus on the history of USA independence which clearly appeals to many Americans. For me the most interesting is the Barnes Foundation. I was lucky enough to visit when few other people were present. The gallery has I believe only recently been relocated to the its new building, housing the works collected by this pharmacologist  in the 1920s when many of the pictures and other artworks were if not cheap far more affordable even to national museums and art galleries than they are now.

For me a virtual philistine,  the little iPhone gadget that one was given to assist with the viewing was ideal. The descriptions of artworks that interested me, given each time by two or three relevant experts in conversational non-patronising style were most helpful. The number of paintings by  of Picasso, Renoir,  Matisse, Van Gogh and a whole host of others, depicted around the walls was huge, and reminded me slightly of the vast number of such paintings at the Hermitage  Museum when mrs maytrees and I visited that in its Leningrad days although of course the buildings' architecture are  of completely different ages. 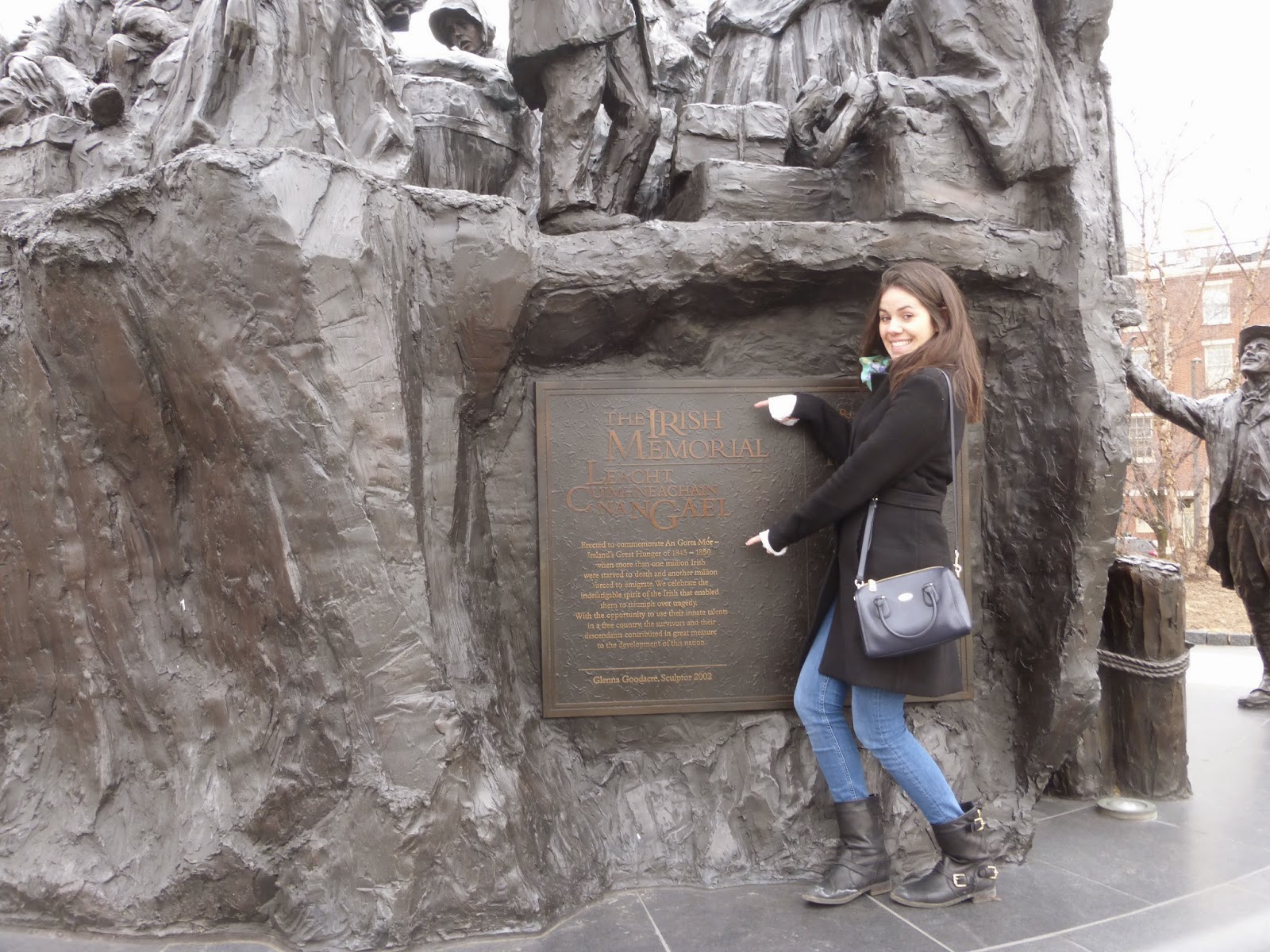 The monument she is identifying is commemorating Irish immigrants but unfortunately the commemorative words are not readable on the photo. Again many of the monuments are a little too grand for my taste but the waterside scene below could quite easily be on the Thames rather than the Schuylkill River. However a trait about American life that intrudes certainly upon tourist ears and eyes is the ever present traffic roar. 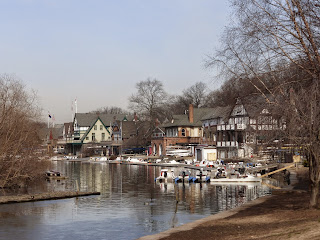 Back to the main City of Philadelphia I loved the market there  in which maytrees min and I grabbed a coffee or three, along with lunch from time to time. 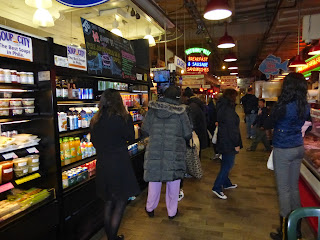 All too soon the trip's end came in sight. After bidding farewell to maytrees min I walked back to the station to take a train to the airport. It was pleasantly surprising to find that the train fare was reduced to $1 for pensioners whether resident or not. Pensioner fares in London require a London residence.

Overall the USA was refreshingly different and friendly.  I especially liked the fact that in city centres at least there seem to be far fewer chain shops than there are in England although of course Starbucks and the like are ever-present.

The motor car does I think need more restraining over in the USA . Ken Livingstone and Boris Johnson as mayors of London have at least begun to make those driving motor cars in Town pay for the privilege of polluting the rest of us with noise and exhaust fumes, which some American mayors could do worse than emulate
at March 28, 2015