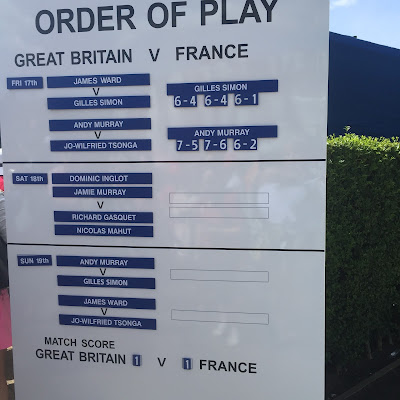 Youngest sister Stephanie   and I attended   the Davis Cup  tennis quarter finals being played yesterday at the Queen's Club Fulham.  Last time she  and I went to the tennis together   was  to the 2012 Olympic Games semi final at Wimbledon.

Yesterday's  section of the Davis Cup  quarter finals (the event covers three days ending this afternoon) was  the men's doubles played between Nicolas Mahut and Jo-Wilfried Tsonga of France and Andy and Jamie Murray of  GB.

Andy was only put in with his brother at the last minute for as can be seen from the picture above, of the order of events, he was initially not due to play so the team captain's late decision to switch the players proved well taken.

The crowds attending especially the French were colourful fun loud and hugely supportive of their respective teams. The French supporters seemed far less inhibited than the British but fun abounded on both sides in the  hot  and sunny weather. 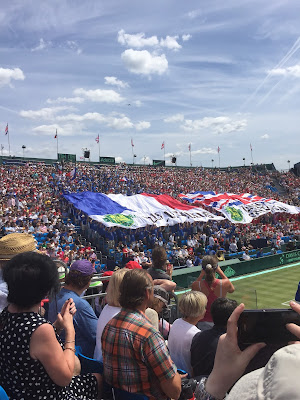 The French supporters flags made my own tiny Union Jack seem rather tame by comparison.

Still turning now to the tennis 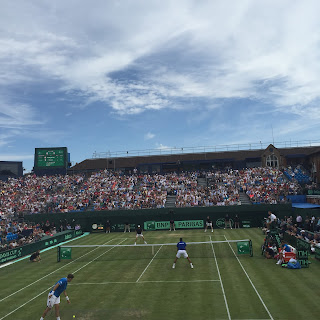 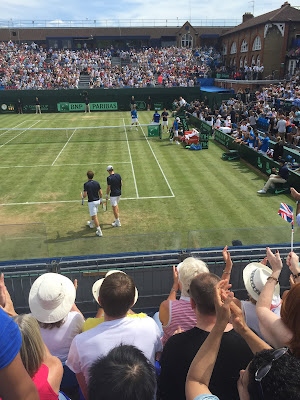 The tennis was very exciting to watch. The French won the first set during which the Murrays looked slightly out of practice. I put this down to the fact that they had not played a doubles match together for a while and to tiredness creeping in after their respective exertions during the previous fortnight at Wimbledon. However losing the first set 4-6 seemed to provide a lift to the Murrays and they won the second set 6-3. The third set was thrilling and ended with the Murrays winning 7:6 following a tie-break. Andy suffered a fall which required medical attention during which the crowd and it was good to see, the French, were concerned for him and of course about whether the match would continue. Whether by accident or design is hard to say but the music played loudly during this brief medical interlude was "Get Up Stand Up" by Bob Marley. In the event Andy did indeed get up and then stood up with brother Jamie to give all their GB supporters some fantastic and exciting tennis to watch.


Whether team GB will go on to win today to put us in the Davis Cup semi finals for the first time since the early 1980s remains to be seen and as for winning the Davis Cup Finals Team GB  last achieved that success in 1936 under Fred Parry.

A terrific afternoon with  much exciting tennis for which many grateful thanks to little sister.