Mrs maytrees having been given  by my youngest sister, a Christmas 2014 gift of a  week day lunch for two at Restaurant Gordon Ramsay in Chelsea it was decided that the best  time for dining out there would be during the first few days of my full time day job  reducing  from 5  to 3 days a week; hence our lunch there yesterday.

Wonderful meal and the restaurant well deserves its 3 Michelin ***.

Pickled and charred fennel salad with smoked mackerel dill creme freche and cucumber to start;
A  delicious pork with coco de paimpal; Morteau sausage mustard and apple for her main course and
Strawberry custard tart with honey and lavender ice cream for her pudding.

And we were both given some off the menu appetisers to whet the appetite at the start  of the lunch and with coffee and mint tea after the meal, which were really delicious. 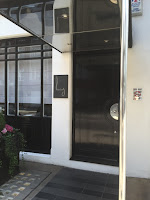 The maitre de hote  was French from Dijon which I believe is where fellow old Beaumont blogger with his French wife and family have  their  home
see The Subliminal Mr Dunn and was so hospitable that he showed us round the restaurant's  kitchen.

The many staff both  serving and behind the scenes with the cooking and food preparation,  produced such really fine food that it must rank among the best dining out in the UK both of us have ever enjoyed. 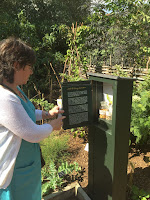 To travel to the restaurant  we went by train to Battersea Park and enjoyed a long walk in the sunshine through the large park and over the Albert Bridge to Chelsea. enroute we came across the Chelsea Physic Garden which we had not previously visited so after our delicious lunch were in just the right frame of mind to enjoy this hidden garden:

As will see from the photos on the right and below  and their own description that: 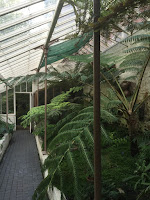 "Tucked away beside the Thames, Chelsea Physic Garden is a celebration of the beauty and importance of plants. This walled Garden was founded in 1673 by the Worshipful  Society of Apothecaries for its apprentices to study the medicinal qualities of plants and it became one of the most important centres of botany and plant exchange in the world..." the garden contains interesting descriptions of herbal medicines alongside some of its plants and green houses. 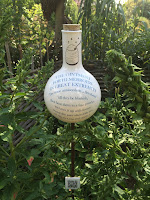 We were fortunate enough to find a bus stop just outside the exit to the Physic Garden and were able to take the local bus back to Clapham Junction train station for the SWTrain  home to Wimbledon.
A great away day.
at August 08, 2015