Wimbledon  roads were closed to nearly all  motorised traffic for the whole of today -Sunday - for what is now fast becoming a traditional series of cycle races, commencing at the Olympic Park on about the anniversary of the 2012 Olympic Games going to Box Hill then back to London with local Worple Road being at mile 90.

The weather was perfect for spectating though possibly a little too hot and sunny for some of the cyclists.

Upon the end of my usual Sunday morning run on Wimbledon Common the generally busy Worple Road was completely free of the heavy traffic that usually  rushes through, so much so that a young woman walking with her husband/boyfriend spontaneously darted out  to perform a solo dance in the middle of the road. 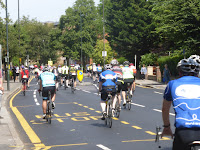 We had younger sister Stephanie coming over to lunch in the sunshine  before taking a walk along the race track  as illustrated by some of the following photos: 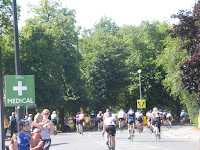 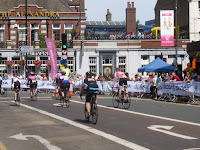 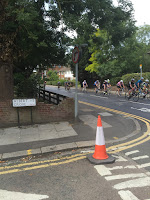 The day made a great and refreshing change from  the usually rather noisier traffic environment and chancing to meet people when walking in the traffic free (bikes apart) environment conversation flowed.

One rather amusing   incident reminded me of the same race a couple of years ago when by chance I bumped into retired solicitor Peter in Wimbledon Village during the cycle race. He asked me then if I would like to cycle to Shoreham by Sea with him, I agreed to do so although my longest cycle ride prior to that time  was about 15 miles.

We  cycled off together at the crack of dawn about two weeks later and  in the event that trip was really enjoyable but exhausting. Cycling to Shoreham.

By chance I met Peter and his wife again, this time in Worple Road. Upon being asked the same question I said that I would definitely need a new light weight bicycle first as my 1960s Raleigh mountain bike fun though it is for cycling over the sometimes boggy terrain of Wimbledon Common or Richmond Park, is rather heavyweight for the far longer ride to the coast.
at August 02, 2015