Maytrees max having been working on Jersey for a few weeks we decided to combine travelling to see him with holidays in Sark and Jersey,

Sark was wonderful and the Stocks hotel where we stayed is the best hotel in the British Isles that  we have stayed at. The path to the hotel set the scene for our stay on this beautiful though tiny island: 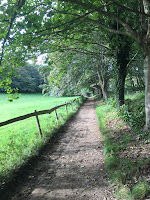 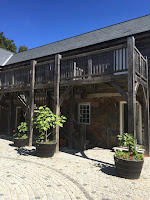 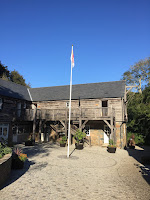 Interestingly when we enquired about the paucity of hotels on Sark despite the existance of several attractive looking hotels which were all surprisingly closed,  comments to us were to the effect that the two multimillionaire Barclay bothers who live on a neighbouring island had in a fit of pique some years ago closed their own hotels on Sark following a local decision not to permit their appointees to take on permanent residence without going through the same processes as others. Whether or not this is true I do not know and of course was unable to clarify this with the Barclay brothers themselves but for whatever reason antipathy towards them simmers in many locals. This antipathy  was certainly not present many years ago when we previously visited the island as  the Barclay premises were then all  open. 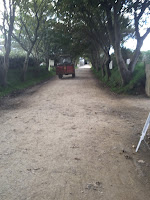 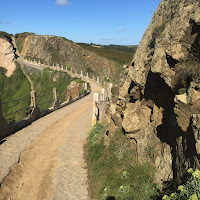 Sark is famed for its complete absence of motor traffic other than tractors and for being without street lights at all. Thus during the day the only vehicles one might come across apart from bicycles were tractors. The sky at night time was fantastic - I had forgotten how wonderful  the universe appears in a clear night sky without any artificial light inhibiting the star gazing.

Sark's population is only some 600 strong yet  their Carl Hester won a gold medal in the 2012 London Olympic Games for dressage resulting in the blue postbox outside the Island's post office below being painted gold though sadly my  photo below omitted the said post box. 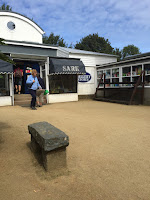 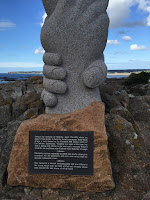 The boat to Jersey was fun though a little blowy. The monument on the right is a  memorial to the sinking of the  ferry "St Malo" with 300+ passengers off Jersey during a storm - mercifully  all the passengers were rescued.

Jersey too was enjoyable though the chief reason for our visit there was to see how maytrees max was faring in his new place of work. In brief so far really well. His employers have provided a home next to the sea for him just out of town, whilst he seeks a modern flat in St Helier. 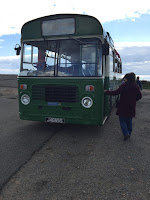 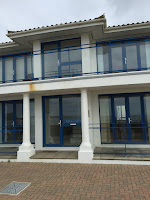 Meanwhile mrs maytrees and I took a luxurious bus tour of the island as will be seen from the photograph of the said vehicle  to the right: above