One of the remarkable aspects of HCPT pilgrimages is that at the end of each Easter Week pilgrimage to Lourdes the view is invariably that "this was the best HCPT week  away ever".

The pilgrimage during Easter Week 2016 was no exception. Interesting too that after years of travelling to Lourdes as a children's group, the decision, largely  based on the ages of the majority of our former children's group  (most of whom had been travelling for 30 years or more) to form an auxiliary group to assist children's groups rather than continue to take  disabled children in our own group, is proving a great success.

HCPT Group 729 was fortunate enough for our 2016 pilgrimage to have as a new helper, a 27 year old lay chaplain of an inner London School. The new  helper James, signified that not only will he travel again with Group 729 but also that he may bring some VIth formers from his school to travel with us in 2017.

If so then in subsequent years HCPT Group 729 could have a new younger leader, more new younger helpers and even begin inviting disabled children to join us.

As for the latest pilgrimage perhaps the pictures below best illustrate a little of the 2016 pilgrimage: 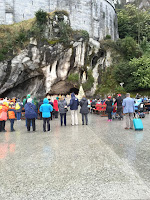 
Below right is a photo taken during the Trust Mass on Thursday which is the only  occasion when nearly all HCPT pilgrims are together during the Easter Week pilgrimage. The group immediately in front of us were from Krakow Poland - and their red shirts signify the 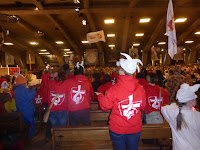 World Youth gathering there later this year. The total attendance at the mass easily exceeded 5000 people. The Blessed Sacrament Procession at Lourdes  is traditionally the time when any miracles of healing do occur. I did not take any photos at that time this year though did subsequently visit the intriguing medical museum for doctors in Lourdes.

The photographs and details of the miraculous cures depicted there are remarkable. However details of one of  the most interesting cures, at least to British pilgrims, does not seem to have survived the museum's change of location.  That one showed a British WWI veteran who had survived a shot in the head in the trenches. He received a War Ministry pension. However he was certified after due  medical diligence  of being cured of his wounds following his pilgrimage to Lourdes and wrote to the War Ministry accordingly. The War Office response to him which the French used to publish in the museum, was to the effect that the British Government does not believe in miracles so insisted that his pension should continue. 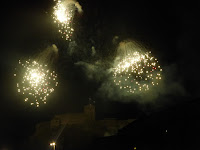 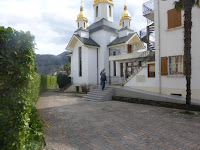 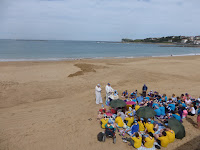 Some Groups celebrated Mass on the beach as illustrated above before enjoying their picnic lunches.

The bus journey back from St Jean de Lourdes was at a stand still on the Auto route for two hours following a huge fire in a nearby lorry which was tackled by many fire crews police and ambulances. Despite the long  delay there were no cries or moans from any of the small children travelling with us at the time on the bus.

The above pictures and comments cannot do the atmosphere and  friendship engendered by the pilgrimage any justice but perhaps provide a little of  the flavour.