Interestingly during a conversation over tea yesterday with a much loved local Ursuline sister the question of political party support arose.

Although she quite properly did not signify her views on political parties generally she did indicate  that despite its flaws she would support the UK remaining in the EU at the forthcoming referendum on the point.

The conversation thankfully did not dwell on the EU issue but moved on to politics more generally at home and abroad.

As to UK political parties I commented that  in the months and years following Harold Wilson's electoral victory in 1966 whilst I was still in the VIth form at Beaumont he seemed to spend vast amounts of money that the nation did not actually possess to such an extent that during his years in office one had to obtain Bank of England permission to take  any money abroad. The old passport record below shows that this even applied to amounts as small as £2. 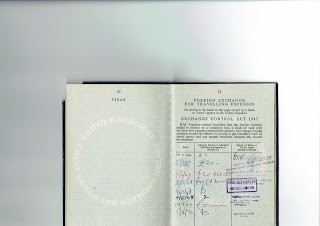 My recollection is that the BoE gave permissions easily enough for pilgrimages to Lourdes with the HCPT but that appalling mismanagement by the Labour Government, meant that I would not again vote Labour.

In 1967 the Liberal party by failing to seek to distinguish between the life of  a woman and the life of  her unborn baby and facilitating the passage of the Abortion Act, then caused me to reject the Liberals.

In 1981 there was an all too brief re energising of UK politics with the emergence of the SDP formed by "The Gang of Four" break away  senior Labour politicians, who were Roy Jenkins David Owens Shirley Williams and Bill Rodgers but alas the SDP was in effect  absorbed by the Liberals by about 1990.

UK political parties  today do at least give the electorate  the  right  to choose more or less between left and right every few years. Even where the electorate's choice is unexpected or switches from one end of the political spectrum to another, there is little turbulence at least for ordinary people, caused by the changes in government.

Sadly the development of politics in the UK is not mirrored  by developments around the world. Thus in Venezuela a country which one would have expected its oil wealth to have provided ample opportunity over the years for political maturity to become established, many people are according to newspaper reports, having to go hungry because of political mismanagement if not worse. Thus today's Guardian newspaper reports that:

Looking back  at comparatively recent   actions UK governments and others have taken to endeavour to restore some kind of order in foreign states beset by war and anarchy my personal conclusion is that this is an immensely difficult route for any outside government to follow. Thus Christian friends from Baghdad  were initially thankful that the British, Americans and others moved in to over-throw that country's tyrannical leadership but now they consider that the West's involvement was unhelpful.

My own view is that save perhaps where as in Afghanistan, education for the female half of the human population was almost outlawed by the Taliban, as girls and women  there appeared virtually placed in servitude, there should be no interference with the regimes of other countries unless such interference is first authorised by the admittedly flawed UN.

Nonetheless perhaps the withdrawal from Afghanistan was premature?

Another exception  in my view would arise where one country commits acts of war on another as self defence and support from friendly nations, would then seem legitimate.

Sadly though, the reduction in quality of political leaders does not seem to be limited to war torn or developing countries.

For example the presidential election in the USA is not scheduled to take place for another 6 months yet one of the two probable candidates, hardly appears to  have the  same kind of political sensitivity to govern as say has Angela Merkel of Germany.

Another major flaw in the USA system appears to be the ability of presidential candidates to throw as much money as they have or  can raise, into the race to win election.

If that analysis is correct what prospects are there in the USA today, for the election of a great leader if not  from a poor family. at least from one which is not hugely wealthy?

In the UK by contrast there are limits on the sums that may be spent on electioneering. These limits are carefully scrutinised so that for example the Tories are currently being investigated for their bus and hotel expenses perhaps exceeding permitted maxima in one or two constituencies.
at May 21, 2016