Waiting for the Train

Awaiting a train is a common enough experience but yesterday, having arrived at London Paddington rather too early for the train to Bath Spa, a walk not too far away, seemed preferable to waiting inside busy Paddington Station.

Kensington Gardens turned out to be only about ten minutes stroll from the Station. A haven of interest and tranquility within one of the world's great bustling cities which was ideal for some exercise away from the roar of traffic that besets cities everywhere in C21. 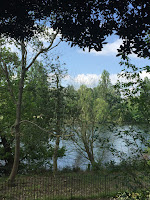 Central London on a Friday at 12 noon is depicted on the right, which to me at least, seems quite remarkable for a busy C21 city. 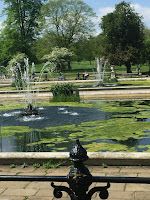 The Italian Gardens (left) were rather more enjoyable to muse upon than the waiting rooms at bustling Paddington Station would have been.

Perhaps many Londoners take for granted the great swathes of public parks and commons that exist all over Town in areas rich and poor.

Knowing south London rather better than  Town, north of the River,  many diverse public parks and commons come to mind  in many different areas such as Richmond Park, Kew Gardens, Wimbledon Common, Putney Heath,  Battersea Park, Clapham, Wandsworth,  Mitcham  and Tooting Bec Commons. Then there are a large number of public smaller open spaces such as Victoria Park Hackney and Merton Park.

North London has as many wonderful open spaces though I know these less well; Hampstead Heath, Highgate Hill, Highgate Cemetery and Regents Park, all come to mind, added to which Central London itself is full of parks and gardens such as Lincoln's Inn Fields, next to my current workplace  St George's Square Pimlico, outside the front door of my previous place of work and Temple Gardens near the Law Courts.

Of course other cities have fascinating open spaces such as  Central Park and the High Line in New York; see New York Parks  and the wonderful parks of Paris; see Beautiful Paris  but the very diversity and extent of London's beautiful open spaces puts them in a class of their own - not that I am at all biased!
at May 14, 2016