As a result of the tragic death in Dublin of the husband of the younger sister of mrs maytrees  it was sadly necessary to spend a few days there   to be with her family and for the funeral. 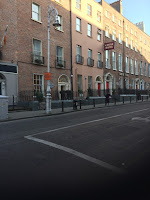 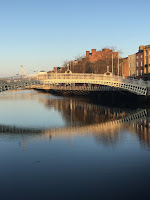 Dublin has not changed very much in the few years since mrs maytrees and I met over there. There must be money coming in to the country from the EU but much of that may have been spent on infra structure. The whole City is being dug up at present for the two original tram lines to be connected and extended. When that is complete later this year, there should be much improvement in public transport. 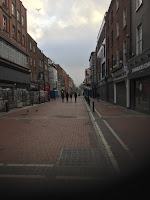 People I spoke with, though more enthusiastic about the EU than many in the UK, were nonetheless critical of what they perceived as the baling out of the banks there at the expense of ordinary men and women.

The City Hall has been converted to a rather interesting exhibition centre with exhibits illustrating the development of the area since Viking times though the one painting on display, was modern rather than historic - at least I assumed so. 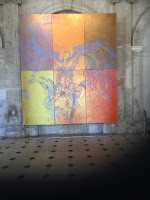 On a day away from the City, I traveled by the Dart to Shankill to meet  an old school friend (we were at an English boarding school in Sussex together some 58 years ago) and  went with him for a glorious run over the pebbly beach -  though at high tide running was slightly difficult in some places. 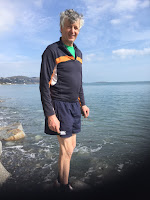 His Romanian wife a lecturer at Trinity, son, daughter in law and two babies, joined us for lunch and his wife recounted tales of Trinity College where she is a lecturer. 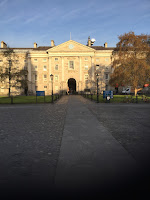 As a result I took a photograph or two there as well.


The flight back was to London City Airport which is far more pleasant  at least to me, than the other rather larger airports around London.
at April 11, 2017