Having agreed albeit with a little reluctance, to attend the  reunion of the final year of old school friends,  50 years after Beaumont closed (the old place is is now an hotel in Old Windsor) I decided to try to meet a friend from those days, who like myself is or at least was not then,  as sporty as many of our contemporaries  were in those teenage years.

Tracing a contemporary from school   and with whom one has not had any contact at all for 50 years or so proved quite difficult.

In fact, chance and good fortune played a good part in the search. Coincidentally, another boy or I should say now, man,  from the old school some 3 years older than I  a few days ago, fortuitously happened to give me a large wave and hoot from his wonderful motorcycle and side car, as he raced up a local hill whilst I was strolling down.

I recalled  that the contemporary I was seeking, had  had an older brother at Beaumont so later I emailed the motor cyclist for his assistance with my search. He gave me the telephone number of the older brother who I subsequently telephoned to explain my quest.

The older brother, Paul signified that  my contemporary, his younger brother  Simon, had not been too keen on the old place so might not take too kindly to my contacting him. Nonetheless having been given  a telephone number I gave Simon a call and we agreed to meet at Southampton where he lived.

Arriving at Southampton Central station I realised that neither of us had a clue as to how the other might appear after 50 years. However we stumbled across each other at an agreed station entrance.

Age had taken a little toll as one might expect but thankfully not too much. Simon cleared the air by signifying that his issue was not about people at the old school nor about  abuse etc and although he could not be persuaded to attend the reunion party of our year in November 2017, we enjoyed several hours of catching up over coffee and then a good lunch at a country pub which Simon kindly provided. He also gave me a tour of the City of Southampton, which I could not recall visiting previously.

Despite huge bombings by German planes and  rockets during WWII, the city has been substantially rebuilt with fine parks and green open spaces abounding.

Simon proved to be brilliant as a tour guide and explained that the City was celebrating the residing there (for a few years)  of Jane Austen although he told me that in reality she could not stand the place!

Some fine stretches of the Old City  walls have survived the WII bombing and Simon showed me the spot where in the fourteenth century, landings by French warships and the pillaging of the gold and other precious materials from the local church, essentially caused the fortification of the City from further such attacks and apparently led to  the start of the 100 years war with the French in 1337.

A most unusual and interesting reunion for which I am truly grateful to  Simon although I could not persuade him to come to our year's reunion at the old place.

Simon Charles Potter informs me that the  "motor cycle and side car" point above is quite inaccurate. and he has sent me a picture of the real machine.  I am pleased to update the post above by using his photo below accordingly: 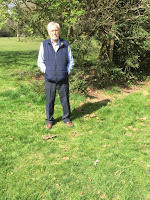 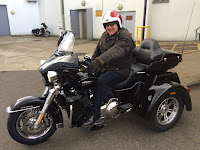 Also having overcome the earlier difficulty of  depicting  a photo of Simon Reynier 50 years on, I have now managed to do this - quite successfully!