The chairman of the VCM trustees, having invited me to attend a performance of the  Apollo 5 group VCM is supporting, I was pleased to accept. The performance took place at the Gresham Centre Gresham Street  EC2V 7BX in the City of London.

Having consulted Google for the best public transport route to the Gresham Centre from Wimbledon I was surprised to see that two hours travelling time was suggested. Instead with the assistance of TfL travelling to the Gresham Centre by train to Waterloo thence by  the Drain direct to Bank, was easy, taking only about 55 minutes and avoided rush hour traffic which was all coming out of London at 6pm, rather than travelling in.

The British heritage site report about St Annes and St Agnes Church to which the Gresham Centre is the hall, states:

St Anne and St Agnes is a small gem of a church opposite Postman's Park, rebuilt by Sir Christopher Wren after the Great Fire of London.
History
The first written record of a church here comes from 1137, and early medieval records seem to be confused over the dedication, sometimes referring to St Anne-in-the-Willows, and sometimes to St Agnes. The double-dedication became commonly used only in the 15th century.
Fire was always a danger to medieval and Tudor buildings, and in 1548 St Anne and St Agnes was devastated by fire. It was rebuilt, and extended in 1624, but disaster struck in 1666 when the Great Fire of London almost completely destroyed the Tudor building. Only part of the 14th century survived the blaze. Sir Christopher Wren built a new church in 1680, incorporating what was left of the tower. Unusually for a Wren church, the design was based on a Greek cross, and the main material was red brick rather than stone. The ceiling is beautifully decorated, contrasting with dark oak furniture.
John Wesley preached here twice, and famous people who lived in the parish include the poet John Milton and the author John Bunyan.
St Anne and St Agnes was badly damaged by German bombs on 29-30 1940, and only reopened in 1966, when it served as a Lutheran church for the Latvian and Estonian communities in London. The interior is a mix of styles, with some features copied from the pre-war building, and other fittings brought to the church from other London churches not rebuilt after the war.
The Lutheran congregation moved to a new church in 2013, and the church is now home to the Gresham School of vocal excellence, run by the Voces Cantabiles Music charity to promote vocal music, particularly amongst young people. The Gresham Centre does not post opening times on their website, unfortunately, but if you're interested in seeing the rebuilt Wren interiors, why not just knock on the door during business hours!
The Gresham Centre is excellent and there were some 50 or 60 guests. Apollo 5 are a group of 5 young singers who sang old and new, classical and folk songs from their new CD "Radiant Dawn", almost continuously for over an hour, including for example "Scarborough Fair".

Certainly my own voice not that I have much singing talent, would have croaked after twenty minutes: 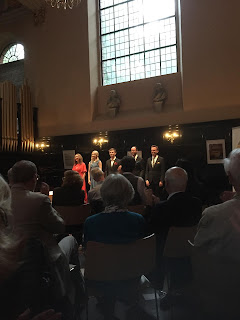 After the concert the singers mingled with the audience and fresh fruit was served with champagne.

A  most interesting musical evening for which many thanks for the invitation to attend, to Roy Blackwell and  to his wife Jennifer. It was also good to be introduced to Chris Wardle of the VCM foundation and to learn of the large number of concerts given and being planned for Apollo5 around the world - I am sure that they will thrive.