Friends asked mrs maytrees and I to accompany them to the old postal museum and mail railway in central London earlier in the week so we went with them not really knowing what to expect.

The museum was surprisingly empty. Of course more people probably attend over the week end but many young children would learn a fair deal about postal history should they be taken there  during the week day term by their schools. Also the museum canteen was good enough for us at least to enjoy a light lunch whilst there though there seemed to be ample places for picnicking inside and out, which might have suited some children rather well.

As for the learning:

The earliest letter boxes appear to have been constructed with Ireland in mind see below left. 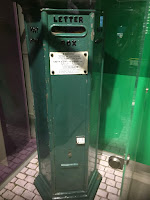 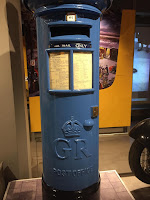 Though in Guernsey they apparently looked as above right. The red pillar boxes currently used in the UK including the Channel Islands came into use sometime before 1879.

An exhibit depicting the great train mail robbery in 1963 is being prepared.

The picture below left  of mrs maytrees and friend waiting for the  old mail train at the nearby station,  illustrates how empty the museum and its mail train station were 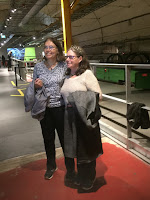 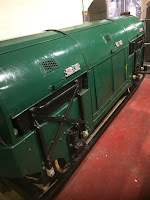 The mail train tunnels were extensive although the journey we took was really only 15 minutes long. The tunnels took a direct hit during WWII though apparently that did not stop the mail being distributed from there for more than 24 hours.

Possibly making all the early C20 tunnels safe enough for visitors to be taken through would be expensive, given C21 health and safety  concerns though we all enjoyed the experience. 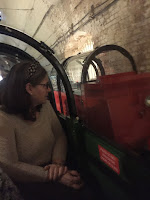 After lunch at the museum and a look at its shop, we walked  the half an hour or so, through side streets and cycle paths to St Pancras Station, where after a four minute wait, the Thameslink Wimbledon train took  all us home, neatly avoiding the tube rush hour traffic.