Nerves coupled  with great  happiness  were the feelings on Friday morning which was the day my  oldest daughter Alice  married Stuart.

Alice had decided to dispense with motorised transport and instead, to walk up to the Sacred Heart Church accompanied by yours truly  and three bridesmaids then after the wedding to walk with husband, parents inlaws and friends to the Cannizaro Hotel  on Wimbledon Common for her wedding reception.

Just before everything was due to start on the day I answered the telephone expecting some concerned guest to be worried about the resurfacing of Worple Road on which see more below. In the event it was a request to be involved with the paralympic flame so an already hectic day was made even more topsy turvy than usual.

The  sun shone for the  first time for ages though also for the first time for about 30 years, road diggers with several lorries decided that morning to resurface Worple Road which the  bride to be father and bridesmaids were to cross enroute to the church. On speaking with their foreman earlier in the day he promised to try to finish by 1:30pm in good time for Alice's  wedding procession,   due to commence at 1:45 pm. Precisely at that time and as good as their word they had just finished as Alice came to Worple Road. Her photographer spoke to one of the workmen and he agreed to stand in Worple Road with a GO sign held proudly aloft as she crossed. Hopefully I will be able to post a  untypical marriage photo of that event later. The workman clearly enjoyed the impromptu part he played and I am grateful to him.

Alice wept  tears  of happiness and we had a short pause on Edge Hill enroute to the Church whilst handkerchiefs were found and put to good effect before Pacabell's Canon, which after all is about eight minutes long was brought to life by Bob Rathbone on the Sacred  Heart  Church Organ. 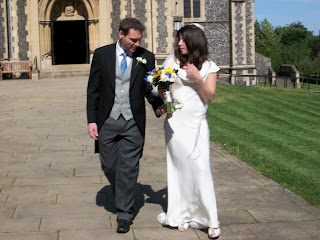 The walk afterwards to the Cannizaro Hotel was also lovely as was the atmosphere there through to the small hours. The absence of cars  other than for  age or medical guests meant that the bride groom and many of their guests were  relaxed and happy during the seven minute stroll from the church to the reception.

Another  photo as guests began to arrive at the Cannizaro:

Our family is huge so apart from  families only one guest (from  HCPT via  Baghdad) of mine was invited. The wedding and party were really fantastic and after so much music dancing and laughter we only arrived home at about 1am.

The wedding speeches were fun too and for the record mine went along the following lines:

First of all Ladies and Gentlemen, I would like to welcome you all here to celebrate Alice and Stuart’s marriage.  It is really marvellous to see so many  brothers and sisters and nephews and nieces, in laws and outlaws here today and parents and grandparents.  It is also really wonderful to see so many friends old and new.

Although I scanned through all the great  works on what the father of the bride needs to say at this time I found nothing really setting out the debt of thanks owed most of all to the mother of the bride. So at the outset I should like everyone to stand and drink a toast to Breda the bride’s mother.

We are sure that you will agree that Alice looks an absolute picture but those of you who know her well might be surprised to see that she is wearing a dress rather than a t-shirt and running shorts, for the other love of Alice’s life is, of course, running.

One of my most colourful memories of her as a very young  adult a few years ago, was when we both ran in the London Marathon.  She was in her early twenties   at the time.   I  was a little older so was rather proud of finishing the 26.2 miles before  her. Alice is not one to be overtaken in running  or anything else and do nothing about it so she began to take up running quite determinedly.  A few years later when we ran the Wimbledon 10K together I only just managed to win but when in the years   following,  Stuart too joined us    she and he both easily overtook me by about mile six as did nephew, Leo.  Still breakfast together afterwards was a great treat. Hopefully the British 10k marathons and even the Olympics will beckon for them in married life.

The Olympic Games are still happily fresh in most people’s minds and  this short time  gap between the Olympic and para-olympic games  also proved to be the    most convenient gap in the  Cannizarro’s time table for us all here this evening. Alice was keen to see some Olympics live not least because   her 92 year old granddad, brother Hugh, bridesmaid Catherine and   I, had had such a great time  seeing team GB win 3 gold medals on Saturday night so bridesmaid Anna stepped in  and used her tickets to treat Alice and herself  to a great morning at the Olympic stadium as  well. That kind of Bridesmaid’s duty only falls  about once every 60 years  but I think that they may have some other duties.

Going back a few years to the times when our annual holidays in the summer were usually to a gite in France, I remember Alice suddenly appreciating that learning French was going to be, she thought, quite easy, when she began to sing to Breda “I’m a je suis; I’m a Je suis”.  However, her French never really seemed to progress much further than that until she came to Lourdes as a voluntary helper with HCPT Group 35.  The work with the children was, of course, hard but Alice also had to learn some more French then, such as ‘un jus d’orange  et deux bieres si vous plait’.  The Hotel Alba barman replied – “certainly I’ll bring them over.”

Bridesmaid Susannah was, also  on hand to help but I think that the help was mainly carrying the said orange juice and beers back to the table.  Father Phelim McGowan SJ, Susannah’s mother, Maria, Ed, Hugh and, of course, Bernadette from Baghdad, with Alice and everyone else in the Group made all of those times with Alice ones to remember with great happiness.

In the event, a few years later, she or was it the Ursuline Convent  Prep and High Schools Wimbledon, began to realise that French was not her best subject after all.  In fact, the Ursuline Sisters (including Sister Dorothy here today (formerly Head at the Ursuline Prep) helped her to pass entirely different non language ‘A’ Levels which enabled Alice to go to Exeter University to read psychology.  Yet, the almost gauche quiet young Alice who went away to University was by the time she secured her Masters Degree, replaced by the confident and beautiful woman you see here today.

Thankfully the government   at just about the time Alice  passed her Masters decided that so few in number were good teachers of maths at secondary school level then, that those who agreed  to study to become mathematics teachers, would be rebated much of the cost so Alice was doubly lucky. A few months after  moving on from university life,  Alice’s little sister bridesmaid Catherine  successfully queued with her for two or was it three nights, for the right to buy  her first permanent or so she then  thought not having  then met Stuart, home a flat in Wandsworth hugely discounted in price for teachers.

She had by  then also, found her next  great love near Epsom – still not Stuart (yet) but her teaching.  In fact, upon undertaking a little research I have discovered that Blenheim High School was named after a Derby winner, Blenheim.  I do not think that there has ever been a Derby winner called Stuart but when Alice brought Stuart to meet us we noticed that she spurred him on in the same way as doubtless Blenheim was in those early years!  I think horse whips are off limits these days though.

Running and racing apart which Stuart is quite adept at, Stuart’s many talents seem hugely relevant to the 21st Century.  First among those talents is his ability to discern someone who will be a loving wife and that talent has in my humble opinion anyway won him the first prize.  Rather less important but very practical is his ability to work with computer and  similar languages – the word quant always comes to my  mind  -and occasionally to assist one of our great banks to use computers which actually work – Nat West and RBS  please take note.

His great talents, I am sure, will cause those of Alice and himself together to excel  together so that as a married couple they will be stronger   and happier together.

So it is my happy duty  now as the father of the bride to propose a toast to the Bride and Groom.


I record  the speech in the light of request to do so but use light blue print given the embarrasment at the record.

In summary - a lovely day and  night and  Breda's family and ourselves were really delighted that Alice and Stuart came for coffee the next morning before their honeymoon tired but like us all, very happy.
at August 19, 2012