Having been inspired by the Olympic anniversary cyclists racing through  Wimbledon a few days back to cycle down to Shoreham-by-Sea with Peter last week, this week maytrees min  and I went for a cycle ride to and round Richmond Park then back via Beverley Brook and Wimbledon Common- really enjoyable.

The cycling over the past few days has sped up the time to and round Richmond Park then back, from almost two hours down to just over one. 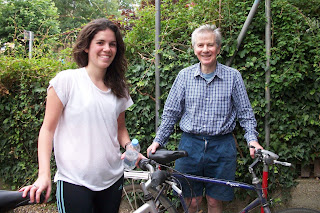