The current wave of unrest in Egypt is hugely tragic especially for the relatives of the dead and injured but also very frustrating for observers outside that country. What if anything should the West try to do?

My own view is that we should resist any temptation to intervene. Intervention in the Middle East ultimately at best seems to takes the affected people little further forward. 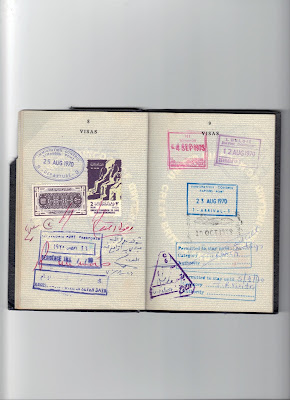 I recall visiting Egypt   with an Old Beaumont school friend . The Aswan dam construction had only just begun hence the passport visa tax for paying for that huge work as featured above.

The trip was during or perhaps just after our  university years in c. 1970. Egypt then was in many ways hugely different from the Egypt of today but war or the fear of fighting has sadly little changed over the subsequent  40 plus years.

We only saw one tractor during our whole visit there and even that was being used to unload ships at Port Alexandria. Otherwise donkeys seemed to be  in more general use especially in fields alongside the Nile.

Visiting the museum in Cairo was strange as the whole building was surrounded by sand-bags and windows covered in tape. The pyramids at both Giza and Saqqara were devoid of many other visitors  perhaps partly explained by the fact of   Russian Sam III missiles stationed at Saqqara.

Travelling by train from Cairo to Luxor was exciting if not dangerous as there were many troops on board, some in chains and at one time machine guns were fired through the train carriage roof.

Going to the lavatory was difficult as one or two of  the apparently  more difficult prisoners were being held in each of  the  cubicles. I recall on one occasion having to pee out of the train between carriages as two  soldiers held machine guns on either side.

Thebes aka Luxor was without tourists at that time and as I recollect virtually without hotels. Local people allowed us to sleep in the open on their roof. Because of concerns about war we were only permitted to cross the Nile during daylight hours. Bicycles were  available for hire and we took our two  bikes by dhow across the Nile early one morning. By happy chance we found a young Swiss lady archaeologist who had been stranded by the fear of war and she took us around the deserted Valleys of the Kings and Queens and their tombs which she had been excavating and  which were otherwise completely deserted. Returning to the Luxor side of the Nile we were able to visit almost alone, the virtually intact tomb of Tutankhamun.

Reminiscing about the above in the context of today's great sadnesses in Egypt leads me to the conclusion that  we in the UK and in the West generally should resist any temptation to interfere in that country's tragic fighting at this time.

Egypt's civilisation is far older than ours; its history sadly is steeped in huge differences between the few rich and a multitude of poor. We in the UK still have a rich/poor divide though obviously not of the Arabian magnitude. Sadly in Arabian countries the few very rich seem to be able to maintain power in ways which seem to Western eyes to be unjust though this still exists to some extent the world over. One of the major causes of concern in my humble opinion, is the financial support being provided by some western countries even now when Egypt may be on the road to revolution. I appreciate  that some Arab dynastic monies would fill any gap left by the withdrawal of say USA funding but frankly that is  no excuse for continuing with financial support for questionable regimes.

Overall my opinion is that the temptation to interfere whether  with money, weapons or people should be resisted. The mistakes of the past should not be repeated. The matter should be referred and then left to the UN.
at August 17, 2013