Cycling from Wimbledon to Shoreham-by-Sea (70 miles)

I thought it worth adding the mileage to this blog's title as I had originally understood  that the cycle ride to Shoreham would be about 50 miles. However perhaps I would not have attempted  70 miles   if I had known of the true length of the journey from the outset, never having cycled more than about 18  miles in one trip before.

The day Monday 12th August was perfect for a cycling trip. Dry, some sunshine and what little wind there was, was behind us. Peter Hayes a retired solicitor who with his wife I had met last week while watching some of the RideLondon 2013 100 mile bikers race through Wimbledon Village, suggested we made the trip. As he is some 7 years older than me I assumed that  the trip was bound to  be feasible and even enjoyable.

So it proved though Peter is a fantastic cyclist far faster than I -  age is no barrier.. We  met at about 6:15am. The initial 3 miles to Kingston Bridge was on  cycle lanes and roads but at that hour in the Summer holiday season there was little traffic.

At Kingston Bridge we left the road and joined the towpath alongside the Thames. For almost the whole of the remaining 67 miles the route was off road following rivers  canals and two very long lengths of disused railway lines - not even like tarmac road surfaces  but far more fun cycling away from all motorised traffic.

We left the towpath for  the first stop which  was at a cafe which had just opened at East Molesley: 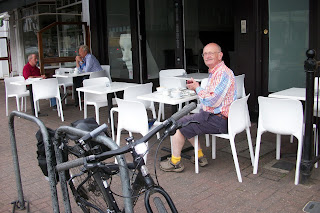 Returning to the towpath we passed by a, or should that be 'an' heron which was perching mid-stream gracefully, presumably waiting to pounce on breakfast. The serious business of cycling then resumed in earnest though the wildlife and scenic views made light of the work. By about 9:30am breakfast beckoned. The cycle path then  entered Guildford without the  traffic and noise that one usually expects when walking or driving there.and we enjoyed a welcome Cafe Nero breakfast.

Returning to the river side we chatted with a couple who were working one of the many locks on the way. 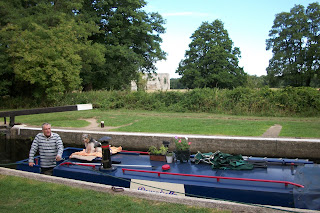 I must confess that as the journey progressed I lost track of the rivers and canals we rode alongside but a Beeching axed railway does come to mind. An old British Railways Southern Region carriage had been placed on the  track near the former West Molesly railway station: 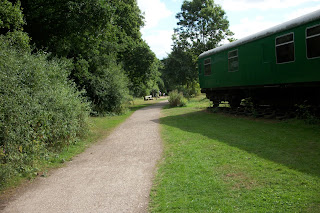 The paths and former railway tracks were great to cycle on free from cars and there were quite a number of people about. Peter who is a far better cyclist than I  was slightly ahead when he came across two girls who were being assisted with a bike problem by a woman. I caught up by which time Peter had fortunately found the necessary spanner in his kit bag and they were soon on their way. Thankfully we ourselves needed none of the spanners or puncture repair kit that he had brought in his saddle bag.

We stopped for some drink and picnic lunch at Cranleigh then back to pedaling until I was almost unable to pedal any further. Then the sea and arrival at Shoreham where we padlocked the bikes and headed for an Italian restaurant  to celebrate with  some delicious cake drenched in an Italian spirit and  some huge mugs of tea. 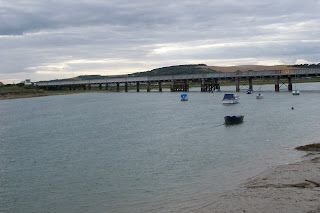 Finally before buying train tickets back to Wimbledon we rode to the old Shoreham Church see below: 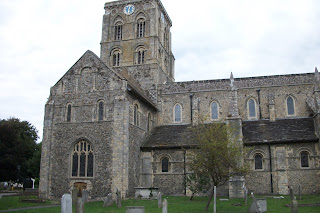 The fare back to Wimbledon even allowing for travel card discounts, was over £11. The train journey time back was over one and a half hours so the bicycle trip had been  quite a journey. I am most grateful to Peter not least  for his knowledge of the route, what to take and great company throughout.
at August 13, 2013