The above subject when it features in newspapers usually inspires me to turn the page.

On a wider level personal instinct is often  to regard the changes required to reduce carbon dioxide and other noxious emissions, to be for government or at least other people to put into effect.

However when the actions in that area,  of say the government of any political hue, seem likely to affect one  personally, such as increasing the tax on motor fuel, then the outcry and protest is huge. Often in such circumstances the government's reaction  is then weak.

For example increases in motor fuel tax in the UK were frozen as a consequence of public outcry. Sadly, fares increases on public transport, especially trains, do not seem to suffer the same fate with the obvious result of even more people taking to their cars.

Perhaps the lesson to be learnt from the difficulties in achieving national reductions in NO2 and CO2 etc emissions is to look at smaller though still widely used polluting  practices that could be altered with rather less inconvenience.

One such polluting wasteful irritant that I came across this morning soon after exiting the local Sainsbury's to walk home with some breakfast croissants was in the category depicted below
though whether the pictured model was being used I have no idea. The actual model is not the particular source of concern but illustrates type of machine and the unnecessary pollution they all generate: 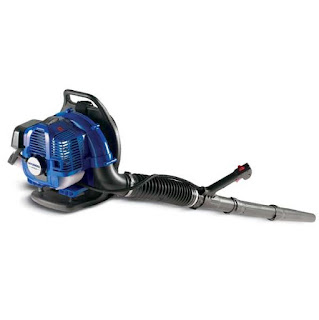 I well recollect such a machine being used frequently during several working days in the London open space near to my old office.

The machine held by the council  gardener would blast incessantly through the otherwise peaceful atmosphere and the leaves from the trees in the square would be blown around a little. Usually slight natural breezes would blow the leaves around a little more meaning that the gardener would start again with his noisy and polluting method of trying to tidy the autumn leaf fall.

In reality all that  would be required to cease this kind of  noise and fuel pollution  would be a garden rake which would ensure that the  fallen leaves  were quietly gathered and  heaped. The gardener  would presumably benefit from the  slight increase in physical exercise that such a change would entail (though obviously exemptions could be made if the gardener was disabled in some way); the council and council tax payers would  achieve some savings in fuel and equipment costs and the many residents and workers around the square would have more peace and quiet.

Using  garden rakes would also save on import costs (I doubt whether any of the noisy leaf blowers are made in the UK) and most of all such savings  would inconvenience no one and benefit many.

Making changes of that kind would  be both practical and effective as well as saving  considerable costs.